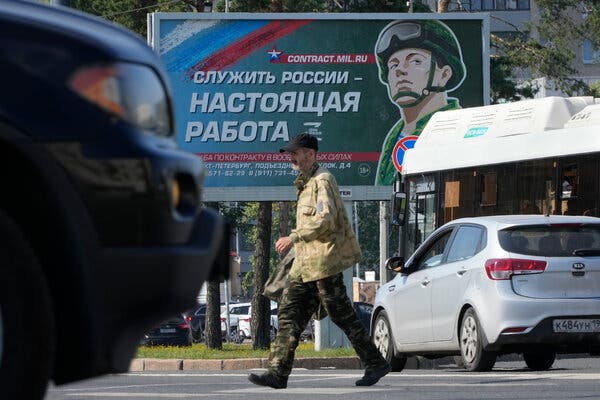 Vladimir Putin ordered a sharp increase in the size of Russia’s armed forces yesterday, signaling a lengthy commitment to the war in Ukraine.

The Russian president raised the target number of active-duty service members by about 137,000, to 1.15 million, as of January of next year. He also ordered the government to set aside money to pay for the growth.

Some analysts described the move as a clear signal that, after a full six months of fighting, Putin had no plans to relent.

Putin may also be trying to rebuild his forces. Experts have attributed the slowing pace of Russia’s offensive to a lack of manpower. And Western estimates of Russia’s casualties, including both deaths and injuries, have run as high as 80,000.

Analysis: Putin’s decree represents a stunning reversal of years of efforts by the Kremlin to slim down a bloated military. But anational draft would destroy the veneer of normalcy that Russia has sought to maintain, despite economic sanctions and the continued fighting.

Liz Truss is trying to appeal to the 160,000 or so dues-paying members of the Conservative Party who will choose the next British prime minister.Credit…Phil Noble/Reuters

Liz Truss, Britain’s foreign secretary, is the odds-on favorite to become the country’s next prime minister.

With less than two weeks left in a race against Rishi Sunak, the former chancellor of the Exchequer, Truss has projected an aura of inevitability, stuck to the Conservative Party orthodoxy and wrapped herself in the mantle of Margaret Thatcher, a conservative icon.

But Truss, 47, has offered very few clues about how she would confront an economic crisis that many experts view as the gravest in a generation. Instead, she has vowed to cut taxes, shrink the size of the government and discard the remaining E.U. regulations.

The State of the War

History: If she triumphs, Truss will become Britain’s third female leader, after Theresa May and Thatcher, an anti-Communist warrior and free-market evangelist who took power during a time of comparable economic hardship in 1979.

How China could blockade Taiwan

China probably still lacks the ability to quickly invade and seize Taiwan, but it is honing its ability to blockade the self-governed island.

In an effort to force concessions, or as a precursor to wider military action, Beijing could ring the island in ships and submarines to prevent vessels from entering or leaving Taiwan’s ports. A blockade would seek to repel U.S. forces, and China would most likely also use warplanes and missiles to dominate the skies.

Taiwan could be vulnerable: Most of its 23 million people are concentrated on its western flank — closest to China — along with its industry and ports. Even a limited blockade would threaten one of the world’s busiest trade routes.

Technology: China sees information as a key battleground. It may try to disable undersea cables that carry about 90 percent of the data connecting Taiwan to the world.

What Else Is Happening

Mack Rutherford, 17, became the youngest pilot to complete a solo flight around the world in a small plane when he landed in Sofia, Bulgaria, on Wednesday.

The Belgian-British pilot flew nearly 30,000 miles (more than 48,000 kilometers) and made stops in 30 countries. “Very happy to be here after five long months,” he said while disembarking.

SPORTS NEWS FROM THE ATHLETIC

This week, we are introducing a new component to this newsletter — a sports section, written by the staff of The Athletic.

Breaking down the Champions League draw: The biggest club competition in European soccer is back with a bang, and the group stage draw has thrown up some instant classics. Chelsea must face the Italian champion, AC Milan; Tottenham will do battle with the likes of Marseille and Sporting Lisbon; and Bayern Munich, Barcelona and Inter Milan have been drawn together in the traditional “Group of Death.”

The sad downfall of Dele Alli: The young England midfielder was once one of the brightest stars in the game. Now, at just 26 years old, and only a few years after what might have been his peak, he’s leaving the Premier League under a cloud, his future uncertain.

Fear and L.G.B.T.Q. rights in Ghana

When the members of the gay rights organization called the Drama Queens want to meet, they first have to identify a secure location and consider hiring security personnel. But they’re not alone. Members of dozens of advocacy groups in Ghana live in fear.

Ghana, in West Africa, is generally considered one of Africa’s most progressive countries. But for the past year, it has been considering a harsh anti-L.G.B.T.Q. bill.

When the measure was first presented, it was dismissed by many as an effort by opposition politicians to raise their profile. But the legislation, formally known as the Promotion of Proper Human Sexual Rights and Ghanaian Family Values Bill, is still alive, and activists say it has fueled a sharp increase in homophobia. There have been reports of police raids and harassment. In June, vandals destroyed L.G.B.T.Q. pride posters in Accra, the capital.

The bill says that any activities promoting gay rights offend traditional values and threaten the concept of family. The country still has a colonial-era law on the books that punishes same-sex relationships, but this proposed legislation would go much further. It would criminalize virtually every aspect of queer culture, from the way people dress to their social gatherings. Allies of L.G.B.T.Q. people could also face criminal charges.

The Drama Queens, formed five years ago, hold workshops on consent and sexual and reproductive rights and have expanded to provide a safe, creative space for women and queer Ghanaians. The organizers put together art exhibitions, film festivals and get-togethers where young people can share their experiences. If Parliament passes the measure, everything they do could become a crime.

Dennis K.F. Agyemang, a co-director of the Drama Queens, denounced the bill, calling it “an imminent threat to organizations and queer safety.” — Lynsey Chutel, Briefings writer based in Johannesburg.

The fruit sandwich is a Japanese treat. Here’s how to make your own.

How to get back in sync with your teen.

Dogs who don’t get enough exercise may be at higher risk of canine cognitive dysfunction, a.k.a. “doggy dementia.”

And here’s today’s Wordle and the Spelling Bee.

That’s it for today’s briefing. Thanks for joining me. — Amelia

P.S. The latest “The New York Times Presents,” available on Hulu, is about an influential doctor who spreads Covid misinformation.

The latest episode of “The Daily” is on the death of Daria Dugina.

Lynsey Chutel wrote today’s Arts and Ideas. You can reach Amelia and the team at briefing@nytimes.com.

China’s Record Drought Adds to Its Economic and Climate Woes