LONDON — “It feels like a religious object,” said Joseph Galliano-Doig, the director of Queer Britain, a new museum here, gesturing toward a heavy oak door in the main exhibition room.

Painted a sickly shade of mustard and studded with steel rivets, the door also had a tiny peephole for prison guards to look through. “This is what Oscar Wilde was martyred behind,” Galliano-Doig said, “it’s just horrendous.” From 1895 to 1897, Wilde was incarcerated for the crime of sodomy, destroying his reputation. He died in exile and poverty three years later at the age of 46.

The object loomed over Queer Britain’s inaugural exhibition, a stark reminder of the danger and taboo being gay represented a century ago. But Galliano-Doig also saw it as representative of “the door that was kicked down and led to all of the joy you can see here,” he said, gesturing to the nearby artifacts narrating L.G.B.T.Q. Britons’ slow journey toward equality over the past century.

Queer Britain, near London’s King’s Cross station, is Britain’s first L.G.B.T.Q. museum. It joins an international network of archives, as well as institutions like the Schwules Museum in Berlin and the American L.G.B.T.Q.+ Museum, which is set to open in New York in 2026. At a time when the public discourse around issues like trans rights materially impacts the lives of L.G.B.T.Q. people, the directors of such institutions have carefully considered how to frame queer history, and they have come to different conclusions about how these radical movements of marginalized people should best be institutionalized.

In under five years, Queer Britain grew from a concept to a bricks-and-mortar home, spearheaded by Galliano-Doig, a former editor of Gay Times magazine, alongside a diverse group of board members and trustees. The museum’s inaugural exhibition, which is free to enter, celebrates 50 years since the first London Pride parade in 1972.

The walls displayed political paraphernalia charting the struggle for L.G.B.T.Q. rights in Britain and included notes from the first parliamentary meeting on AIDS and banners from this year’s Trans+ Pride parade, held ten days before the exhibition opened. Other exhibits spotlight key figures in local L.G.B.T.Q. activism and famous Britons like Ian McKellen, Elton John, Derek Jarman and Virginia Woolf. 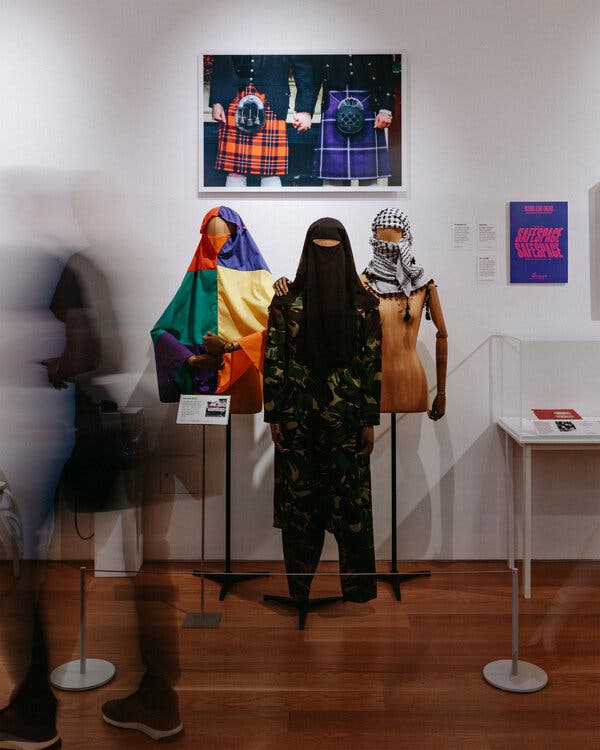 At Queer Britain, a rainbow hijab is displayed next to a hijab incorporating camouflage and a Palestinian kaffiyeh.Credit…Alex Ingram for The New York Times

One of the most striking exhibits shows a rainbow hijab worn in 2005 by a representative of the L.G.B.T.Q. Muslim organization Imaan to London Pride, where the group gave a defiant speech after members said they experienced Islamophobic slurs from other marchers. While many of the museum’s objects symbolized triumphs for L.G.B.T.Q. rights that belong to the past, these garments invoked continuing and complex debates regarding Islam and sexuality.

Galliano-Doig wanted to represent diverse queer experiences, he said, and to create a museum where visitors not only see, but also feel seen. “In these first few months it wasn’t unusual to have someone walk in here and burst into tears,” he said. “So much of the history of L.G.B.T.Q.+ people has been about erasure. For us this is saying: we are here and our stories deserve to be told.”

Queer Britain’s early antecedents were the institutions that opened in the 1980s as a response to the AIDS crisis. “People started to get sick and die, so there was a sudden need to document these histories which looked to be slipping away very quickly,” said Ben Miller, a writer and historian who co-hosts the “Bad Gays”podcast, in a recent video interview. This led to the founding of the GLBT Historical Society in San Francisco and the Schwules Museum in Berlin, both in 1985.

On Being Transgender in America

These spaces tend to focus on local histories. The Schwules Museum notes that Berlin was where the term “homosexual” was first coined, and is currently hosting an exhibition about a renowned gay activist squat in the city called Tuntenhaus. The IHLIA L.G.B.T.I. Heritage archive in Amsterdam has a collection representing more than 150 countries, but also regularly publishes oral histories from older Dutch L.G.B.T.Q. people.

Queer Britain is just one of a wave of new L.G.B.T.Q. institutions in London. “We’re still trying to see how we fit together with other queer spaces like Queer Circle and the L.G.B.T.Q.+ Community Center,” said the exhibition’s curator, Dawn Hoskin. The shift from archives primarily for researchers like IHLIA and the Bishopsgate Institute in London toward public-facing showcases of L.G.B.T.Q. history reflects an increasing interest in these topics across Europe and the United States, fed by a steady stream of new books, podcasts and even a history series on Discovery+ called “The Book of Queer.”

Why is all this attention being turned toward queerness now? “The people who were part of the early waves of the recent queer liberation movement are hitting an age where they’re thinking about legacy, and what the future of the movement looks like,” said Ben Garcia, the executive director of the forthcoming American L.G.B.T.Q.+ Museum. “There’s a number of people who have moved out of the white-hot moment of activism into a more reflective space.”

Galliano-Doig points to increased visibility. “There’s a flowering of people coming out these days,” he said. “It becomes impossible not to recognize that we’re embedded in the community.” This has come in tandem with advances in L.G.B.T.Q. rights across Europe and the United States over the past two decades, including same-sex marriage and gender recognition acts. This also means there is more support and funding available for specialist institutions like these museums.

Organizations like Queer Britain have a lot to celebrate, but triumphs for L.G.B.T.Q. rights are only part of the story. In many countries around the world, people with diverse genders and sexualities are still locked behind doors as impenetrable as Oscar Wilde’s, be they physical, social or psychological. Same-sex relations are still criminalized in around 70 countries, and women and people of color are often still sidelined within L.G.B.T.Q. communities. In a speech at London’s recent Trans+ Pride, the actress Abigail Thorn described how “legally and politically,” trans people in Britain “are not allowed to control our own lives.”

One area of the Queer Britain exhibition commemorates the Lesbians and Gays Support The Miners movements from the 1980s. In the black-and-white photograph, bottom left, the actor Ian McKellen marches in a protest.Credit…Alex Ingram for The New York Times

Even tangible progress is complicated: Different groups within the L.G.B.T.Q. umbrella often have different legal rights, rights which are not necessarily guaranteed, as evidenced by the recent push in the U.S. House of Representatives to codify same-sex marriage protections after Justice Clarence Thomas suggested the Supreme Court “should reconsider” past rulings. How should museums represent such live-wire, politically fraught issues?

The existing spaces take different approaches to balancing political advocacy with celebrating diverse genders and sexualities. While Galliano-Doig called Queer Britain “a queer-run space for everyone,” meaning they have a single message for both L.G.B.T.Q. and straight audiences, Birgit Bosold, a Schwules Museum board member, described that museum as instead having a “double role: to advocate to the mainstream audience for the recognition of queer heritage as part of collective history, and to challenge problematic discourses which are dominant within the queer community.”

The Berlin museum does this partly by spotlighting groups that are marginalized within the L.G.B.T.Q. community. A recent exhibition focused on intersex people and another will open in September on queerness and disabilities. Bosold said these projects begin to address historical biases in wider culture and within the museum itself — when she joined as the board’s first woman 15 years ago, the museum still acted like it was run by and for exclusively cisgender gay men, she said.

“We’re trying to have a critical and interesting conversation, to have a take, to have an argument,” said Miller, who is also on the Schwules board. “We do not want to become a place where people come to receive a predigested” version of queer history.

Garcia plans for the American L.G.B.T.Q.+ Museum to be a space that engages visitors in activism as well as teaching them about history. “As a gay person working in a queer organization, our lives are inherently political and controversial,” he said. “Our movement needs to progress both within traditional institutions and from outside, pushing against them. We are a museum that sees ourselves not simply as a documenter of the queer liberation movement, but also as part of that movement.”

Queer Britain’s director, Joseph Galliano-Doig, wanted to represent diverse queer experiences, he said, and to create a museum where visitors not only see, but also feel seen.Credit…Alex Ingram for The New York Times

While Queer Britain’s opening exhibition felt more cautious than Schwules’s explicitly political stance, it is perhaps just a starting point. “We’re trying to get a sense of the kaleidoscope and variety of what this museum could be,” Hoskin said. The team plan to listen to the community, Galliano-Doig said, and evolve as they find their voice and identity as an institution. If all goes to plan, they will move to a much bigger space within five years.

As they continue growing, how these museums decide to present L.G.B.T.Q. history will remain an urgent question. “From the earliest days, history was a tool in the construction of queer identity,” said Huw Lemmey, Miller’s co-host on the “Bad Gays” podcast. “Museums aren’t independent reporters on the past, they’re part of an ongoing process of identity formation, so the stakes are very high.”

WeWork posts a smaller loss as its office occupancy grows.