ASHLAND, Ore. — Smoke from a raging wildfire in California prompted the Oregon Shakespeare Festival to cancel a recent performance of “The Tempest” at its open-air theater. Record flooding in St. Louis forced the cancellation of an outdoor performance of “Legally Blonde.” And after heat and smoke at an outdoor Pearl Jam concert in France damaged the throat of its lead singer, Eddie Vedder, the band canceled several shows.

Here in the Rogue Valley, the Oregon Shakespeare Festival is seeing an existential threat from ever-more-common wildfires. In 2018 it canceled 25 performances because of wildfire smoke. In 2020, while the theater was shut down by the pandemic, a massive fire destroyed 2,600 local homes, including those of several staffers. When the festival reopened last year with a one-woman show about the civil rights activist Fannie Lou Hamer, wildfire smoke forced it to cancel almost every performance in August.

“The problem is that in recent years there have been fires in British Columbia and in the mountains in Washington State and fires as far as Los Angeles,” said Nataki Garrett, the festival’s artistic director. “You have fire up and down the West Coast, and all of that is seeping into the valley.”

Even before this year’s fire season began, the festival moved the nightly start time of its outdoor performances later because of extreme heat. 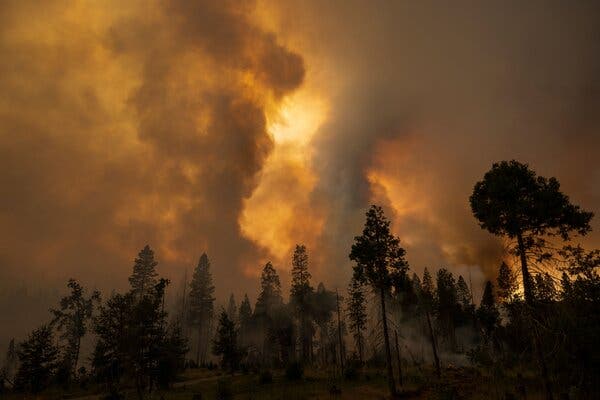 Wildfires, which generate smoke that pollute air quality over long distances, have already begun burning this year in parts of Europe and the United States. In July, the Oak fire raged near Yosemite National Park.Credit…David McNew/Agence France-Presse — Getty Images

Record rainfall in the St. Louis area caused flash flooding. Among the effects: The Muny, a major outdoor musical theater, had to cancel a performance of “Legally Blonde” because of flooding on its campus.Credit…Robert Cohen/St. Louis Post-Dispatch, via Associated Press

Ashland is not the only outdoor theater canceling performances because of wildfires. Smoke or fire conditions have also prompted cancellations in recent years at the Butterfly Effect Theater of Colorado; the California Shakespeare Theater, known as Cal Shakes; the Lake Tahoe Shakespeare Festival in Nevada and the Getty Villa in Malibu, Calif., among others.

“We are one giant ecosystem, and what happens in one place affects everywhere,” said Robert K. Meya, the general director of the Santa Fe Opera, which stages open-air productions against a striking desert backdrop each summer, and which, in an era of massive wildfires near and far, has installed sensors to gauge whether it is safe to perform.

The reports of worsening conditions come from wide swaths of the country. “Last summer was the hardest summer I’ve experienced out here, because fires came early, and coupled with that were pretty severe heat indexes,” said Kevin Asselin, executive artistic director of Montana Shakespeare in the Parks, which stages free performances in rural communities in five Rocky Mountain West states, and has increasingly been forced indoors. “And the hailstorms this year have been out of control.”

In southern Ohio, a growing number of performances of an annual history play called “Tecumseh!” have been canceled because of heavy rain. In northwest Arkansas, rising heat is afflicting “The Great Passion Play,” an annual re-enactment of the crucifixion and resurrection of Jesus. In Texas, record heat forced the Austin Symphony Orchestra to cancel several outdoor chamber concerts. And in western Massachusetts, at Tanglewood, the bucolic summer home of the Boston Symphony Orchestra, more shade trees have been planted on the sweeping lawn to provide relief on hot days.

“Changing weather patterns with more frequent and severe storms have altered the Tanglewood landscape on a scale not previously experienced,” the orchestra said in a statement.

On Sunday, the U.S. Senate voted in favor of the nation’s first major climate law, which, if enacted into law, would seek to bring about major reductions in greenhouse pollution. Arts presenters, meanwhile, are grappling with how to preserve outdoor productions, both short-term and long-term, as the planet warms.

“We’re in a world that we have never been in as a species, and we’re going into a world that is completely foreign and new and will be challenging us in ways we can only dimly see right now,” said Kim Cobb, the director of the environment and society institute at Brown University.

The Oregon Shakespeare Festival is an important driver of the local economy, but smoke and heat associated with climate change have become a growing challenge.Credit…Kristina Barker for The New York Times

The Oregon Shakespeare Festival, which before the pandemic had been one of the largest nonprofit theaters in the country, is, in many ways, patient zero. The theater is central to the local economy — the downtown features establishments with names like the Bard’s Inn and Salon Juliet. But the theater’s location, in the Rogue Valley of southern Oregon, has repeatedly been subject to high levels of wildfire smoke in recent years.

The theater, like many, has installed air quality monitors — there’s one in a niche in the wall that encircles the audience in the open-air Allen Elizabethan Theater, where this summer “The Tempest” is alternating with a new musical called “Revenge Song.” The device is visible only to the keenest of eyes: a small cylindrical white gadget with lasers that count particles in the passing breeze.

The theater also has a smoke team that holds a daily meeting during fire season, assessing whether to cancel or proceed. The theater’s director of production, Alys E. Holden, said that, ever since the time she opposed canceling a performance mid-show and later learned a technician had thrown up because of the air pollution, she has replaced her “show must go on” ethos with “If it’s too unsafe to play, you don’t play.”

This year the festival reduced the number of outdoor performances scheduled in August — generally, but not always, the smokiest month.

Air quality monitors, now in use at many Western venues including the Santa Fe Opera, can help presenters protect not only audience members but also performers. The opera is particularly concerned about its singers.Credit…Ramsay de Give for The New York Times

“Actors are breathing in huge amounts of air to project out for hours — it’s not a trivial event to breathe this stuff in, and their voices are blown the next day if we blow the call,” Holden said. “So we are canceling to preserve everyone’s health, and to preserve the next show.”

Wildfire-related air quality has become an issue for venues throughout the West. “It’s constantly on our mind, especially as fire season seems to start earlier and earlier,” said Ralph Flores, the senior program manager for theater and performance at the J. Paul Getty Museum, which has a 500-seat outdoor theater at the Getty Villa.

Air quality concerns sometimes surprise patrons on days when pollution is present, but can’t be readily smelled or seen.

“The idea that outdoor performance would be affected or disrupted by what’s happening with the Air Quality Index is still a fairly new and forward concept to a lot of people,” said Stephen Weitz, the producing artistic director at the Butterfly Effect Theater of Colorado, which stages free shows in parks and parking lots. Last summer the theater had to cancel a performance because of poor air quality caused by a faraway fire.

The coronavirus pandemic also remains a concern, prompting crew members in Santa Fe to wear masks as they met before a performance of Bizet’s “Carmen.”Credit…Ramsay de Give for The New York Times

Another theater there, the Colorado Shakespeare Festival, is now working with scientists at the affiliated University of Colorado Boulder on monitoring and health protocols after a fire more than a thousand miles away in Oregon polluted the local air badly enough to force a show cancellation last summer. Tim Orr, the festival’s producing artistic director, recalled breaking the news to the audience.

“The looks on their faces were surprise, and shock, but a lot of people came up and said ‘Thank you for making the right choice,’” he said. “And when I stepped offstage, I thought, ‘Is this going to be a regular part of our future?’”

Planning for the future, for venues that present out of doors, now invariably means thinking about climate change.

The Santa Fe Opera’s stunning outdoor location is one of its great attributes, but also makes it vulnerable to climate change.Credit…Ramsay de Give for The New York Times

Oskar Eustis, the artistic director of the Public Theater, which produces Free Shakespeare in the Park at the Delacorte Theater in New York’s Central Park, said that the 2021 summer season, when the theater reopened after the pandemic shutdown, was the rainiest in his two decades there. “I could imagine performing more in the fall and spring, and less in the summer,” he said.

In some places, theater leaders are already envisioning a future in which performances all move indoors.