After serving nearly 20 years in a New York State prison for a 1989 murder he did not commit, Huwe Burton walked out like many inmates: with no money, no credit and no one to borrow from. Mr. Burton, who got by as an elevator repairman, could sue for millions in compensation, but payouts typically take years.

So after being exonerated in 2019, Mr. Burton took an advance of $500,000 from a company that typically funds plaintiffs waiting to settle auto insurance claims, slip-and-fall judgments and medical malpractice cases. Mr. Burton’s advance, at 28 percent annual interest, came from USClaims, a company based in Florida whose investors include Further Global Capital Management and the Blackstone Group, one of the world’s largest private equity firms.

Across the nation, exonerations — and cash settlements — have risen steadily thanks to DNA-based reinvestigations, conviction-integrity units created by prosecutors and the vigor of innocence organizations. Now, the billions in payouts have attracted companies offering high interest cash advances while exonerated people await their claims. Many firms are backed by private equity investors eager to bet on nearly certain short-term profit.

Many of the advances offer a tantalizing provision: If prisoners fail to collect a payout, the advance is essentially forgiven. But if the claims come through, which they usually do, the company makes a healthy profit when the exoneree pays in full, often from a settlement that far outstrips the size of the debt.

Mr. Burton was a good investment. Wrongful conviction cases are exceptionally good bets because they have often gone through years of appellate court scrutiny and have been vetted by the lawyers handling the claims, said the president of USClaims, Donna Lee Jones.

She said that in the eight years since the firm began taking such cases, she has seen a rise in demand. This year, a record 367 cases have been added to the National Registry of Exonerations, which usually records some 200 each year.

A total of $2.65 billion nationwide has been paid to people on the registry who have brought civil rights suits, according to Jeffrey Gutman, a law professor at George Washington University. The average payout is $3.7 million for the 716 exonerees who collected compensation, or $318,000 per year in prison, he said.

For Mr. Burton, now 50, the advance was “a reset button, a chance to balance things out” until his settlement offered him true stability.

“It’s kind of hard to ask people in that state, who need relief financially, not to do it at all, to worry about the interest when your bills are coming,” Mr. Burton said. “Even though you have money coming eventually, you still have to live today.”

By the time Mr. Burton received an $11 million settlement from the city last year, the advance had accumulated $210,000 in interest over 16 months. 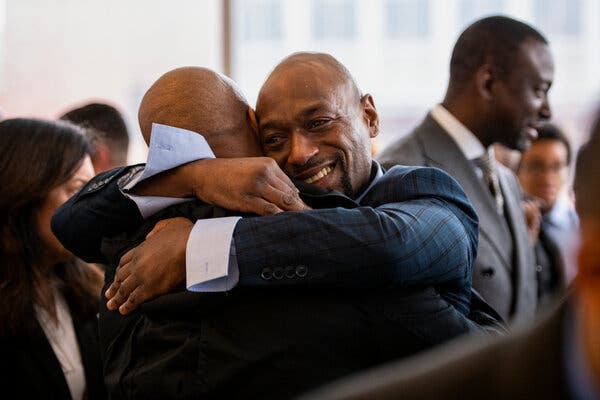 Huwe Burton walked free after 20 years, cleared of any crime, but with few financial resources to draw on.Credit…Gregg Vigliotti for The New York Times

Such deals go largely unregulated in many states. Usury laws govern conventional loans; in New York, charging more than 25 percent annual interest is ordinarily prohibited. But finance companies have successfully argued that they are not making conventional loans because they risk losing the entire amount if the lawsuit — the loan’s collateral — fails. Unlike with conventional loans, they cannot try to seize the borrower’s wages.

Firms lending to exonerees often quote rates of 33 percent annually, meaning that the former prisoners must repay double their advances after three years. Some claims take longer, and the loans can balloon.

Ms. Jones said her company’s interest rate for car accidents and other cases was often 36 percent annually; for exonerees like Mr. Burton, it’s often 28 percent with a cap, so that the client will not repay more than double the amount funded.

But many lawyers and advocates for prisoners argue that the lenders prey on the economic desperation of those who have already suffered incalculably in the criminal justice system. Snowballing loans can pressure exonerees to accept an early lowball offer to settle their cases, said Ron Kuby, a civil rights lawyer.

“These are among the most unjustifiably victimized people in our society, plucked out of their lives and thrown behind bars,” Mr. Kuby said. “To then monetize them seems a little harsh.”

The practice has become a niche in the wider industry of investor-backed companies that offer cash advances at high rates to people awaiting settlements related to slip-and-falls, auto accidents, medical malpractice and other areas.

And the sector has grown ever more competitive as lenders follow exoneration cases closely and try to develop relationships with lawyers. Zachary Margulis-Ohnuma, a Manhattan lawyer who handles wrongful conviction claims, said he would often get cold calls from lenders.

Demand for exoneration advances has grown in the eight years that USClaims has offered them, said Donna Lee Jones, the company’s president.Credit…Saul Martinez for The New York Times

Mr. Burton’s lawyer, Jonathan C. Moore, said he tried to steer his clients away from high interest advances. But he conceded that they were a lifeline, albeit an expensive one.

“For someone who is exonerated and getting out of prison after serving 20 years, they want to live their life,” he said.

USClaims, which offers a toll-free number and a free quote via its website, and other top presettlement funding firms pop up readily on an internet search for an exoneration loan. But Ms. Jones said that her company did not directly solicit exonerees and worked only with lawyers experienced in handling civil rights cases.

“If the attorney is not supportive, we won’t fund the case,” she said.

Some lawyers ensure their clients borrow only enough for basic needs, ideally in monthly stipends, and help negotiate the most favorable terms. Mr. Kuby called the advances “a necessary evil.”

In 38 states and the District of Columbia, exonerees may file compensation claims against the state in addition to, or in lieu of, civil rights lawsuits against municipalities, Mr. Gutman said.

Average payouts by New York State are among the country’s highest, he said, and account for more than one-third of all state claims nationally. When those are combined with damages from municipalities in civil rights cases, the amount paid to exonerees in New York State tops $1 billion, far more than payments in any other state, Mr. Gutman said.

For the past decade, a parade of people have been freed from New York prisons after being convicted around the early 1990s, when high crime rates pressured the police and prosecutors to pursue arrests aggressively. That contributed to a rash of wrongful convictions stemming from flawed police tactics, coerced confessions, bad witnesses and the suppression of vindicating evidence.

Many exonerees file federal lawsuits against New York City, which over the past decade has paid out about $500 million. Those who have served more than a decade in prison can often receive more than $10 million in combined claims, settlements or judgments.

One of Mr. Kuby’s clients, Sundhe Moses, served 18 years for a wrongful 1995 murder conviction in Brooklyn. When Mr. Moses was released in 2013, he was broke and desperate for cash to cover debts, including $40,000 in child support.

Tribeca said Mr. Moses received four advances totaling $489,413 between April 2018 and March 2019, and was charged roughly the usual 33 percent annual rate and even received a final discount before he paid the debt off in summer 2019.

Mr. Moses said he had borrowed far less but acknowledged that he was cleareyed about what he said became a commitment of about $650,000.

When the city made an early offer of $3.7 million, less than he expected, his debt was “a real consideration” in accepting it.

Abraham Arouesty, a lawyer based in Mexico who is Tribeca’s vice president of business development, said Tribeca had funded 21 exonerees in the past three years, with interest rates that account for the risk of losing the entire advance to a client with a losing civil case. “You can almost call it a gamble,” Mr. Arouesty said.

The company’s chief executive has had his own run-ins with the law. In 2011, when Mr. Donadio ran a different litigation funding firm, he pleaded guilty to federal wire fraud conspiracy charges in connection with a secret kickback scheme. And in 2017, he paid a fine after a Consumer Financial Protection Bureau investigation into deception regarding loans to clients, including N.F.L. concussion victims.

Mr. Donadio has had no legal problems since these cases, Mr. Arouesty said, and his struggle for redemption fueled his commitment to helping exonerees.

“He’s owned his mistakes and made full restitution,” Mr. Arouesty said, “and ever since has taken it to heart to conduct business with the utmost level of ethics and transparency.”

Advances like the ones his firm offers are common knowledge among exonerees, thanks to referrals from wrongfully convicted comrades or from lawyers.

“It’s right there in neon lights,” said Fernando Bermudez, who was released in 2009 at age 40 after serving 18 years for a wrongful murder conviction in Manhattan. A lawyer connected him with a lender.

Mr. Bermudez took one advance of $215,000 and then another for $75,000, and wound up paying roughly double on both. The sting was alleviated by the fact that he received nearly $12 million in state and city payouts combined.

Felipe Rodriguez was convicted in 1990. When he was cleared, he said, normal life came at a steep price.Credit…Sean Sirota for The New York Times

One of Mr. Margulis-Ohnuma’s clients, Felipe Rodriguez, was released in 2017 after serving more than 27 years for a wrongful conviction in a 1987 stabbing death in Queens. A fellow exoneree slipped him a phone number and a piece of advice.

“He said, ‘You’re exonerated now and you’re waiting on your lawsuit and you’re going to need a loan because you have nothing,’” Mr. Rodriguez, now 57, recalled. “I took it. I had no choice.”

“I just wanted to relax and take a deep breath and bring some normalcy into my life,” he said, “but that normalcy comes at a high price.”

He is expecting to settle for an even higher figure with his continuing lawsuit against New York City. But even if it exceeds $10 million, he said, he would keep his job serving guests in a Times Square hotel. He drives there in a new Mercedes from a new house in Queens.

As for his loan, he said he had no regrets.

“I needed a service and they provided it,” he said. “Most people aren’t willing to take a chance on any of us.”

Tags
From Said That Was With

Meet the Voters Who Fueled New York’s Seismic Tilt Toward the G.O.P.