In June, 100 fruit fly scientists gathered on the Greek island of Crete for their biennial meeting. Among them was Cassandra Extavour, a Canadian geneticist at Harvard University. Her lab works with fruit flies to study evolution and development — “evo devo.” Most often, such scientists choose as their “model organism” the species Drosophila melanogaster — a winged workhorse that has served as an insect collaborator on at least a few Nobel Prizes in physiology and medicine.

But Dr. Extavour is also known for cultivating alternative species as model organisms. She is especially keen on the cricket, particularly Gryllus bimaculatus, the two-spotted field cricket, even though it does not yet enjoy anything near the fruit fly’s following. (Some 250 principal investigators had applied to attend the meeting in Crete.)

“It’s crazy,” she said during a video interview from her hotel room, as she swatted away a beetle. “If we tried to have a meeting with all the heads of labs working on that cricket species, there might be five of us, or 10.”

Crickets have already been enlisted in studies on circadian clocks, limb regeneration, learning, memory; they have served as disease models and pharmaceutical factories. Veritable polymaths, crickets! They are also increasingly popular as food, chocolate-covered or not. From an evolutionary perspective, crickets offer more opportunities to learn about the last common insect ancestor; they hold more traits in common with other insects than fruit flies do. (Notably, insects make up more than 85 percent of animal species). 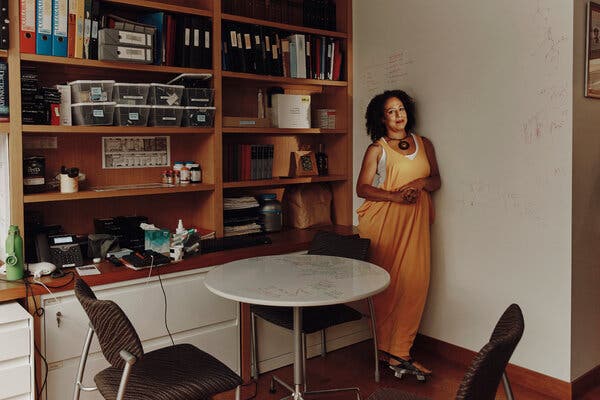 Cassandra Extavour, a principal investigator on the study, in her office at Harvard University. “We should pick the right tool, and that includes the right organism, for the sort of question we want to ask,” she said.Credit…Tony Luong for The New York Times

Notebooks and a plate of crickets in Seth Donoughe’s home lab near the University of Chicago. He described embryology as the study of how a developing animal makes “the right parts at the right place at the right time.”Credit…Mustafa Hussain for The New York Times

Dr. Extavour’s research aims at the fundamentals: How do embryos work? And what might that reveal about how the first animal came to be? Every animal embryo follows a similar journey: One cell becomes many, then they arrange themselves in a layer at the egg’s surface, providing an early blueprint for all adult body parts. But how do embryo cells — cells that have the same genome but aren’t all doing the same thing with that information — know where to go and what to do?

“That’s the mystery for me,” Dr. Extavour said. “That’s always where I want to go.”

Seth Donoughe, a biologist and data scientist at the University of Chicago and an alumnus of Dr. Extavour’s lab, described embryology as the study of how a developing animal makes “the right parts at the right place at the right time.” In some new research featuring wondrous video of the cricket embryo — showing certain “right parts” (the cell nuclei) moving in three dimensions — Dr. Extavour, Dr. Donoughe and their colleagues found that good old-fashioned geometry plays a starring role.

Humans, frogs and many other widely studied animals start as a single cell that immediately divides again and again into separate cells. In crickets and most other insects, initially just the cell nucleus divides, forming many nuclei that travel throughout the shared cytoplasm and only later form cellular membranes of their own. 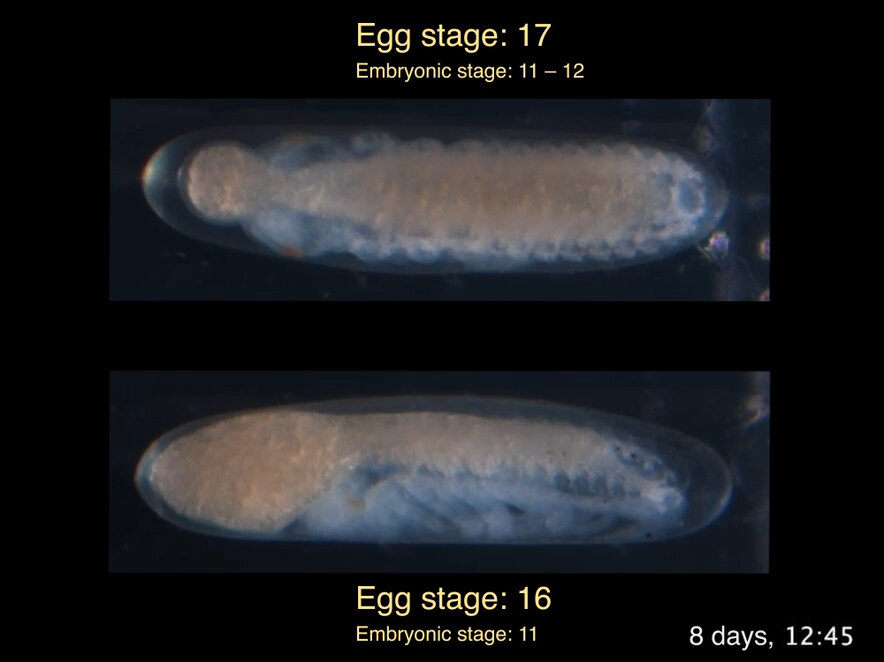 A time-lapse video of two cricket embryos inside their respective eggs, captured during a five-day period of their development. Video by Seth Donoughe

In 2019, Stefano Di Talia, a quantitative developmental biologist at Duke University, studied the movement of the nuclei in the fruit fly and showed that they are carried along by pulsing flows in the cytoplasm — a bit like leaves traveling on the eddies of a slow-moving stream.

But some other mechanism was at work in the cricket embryo. The researchers spent hours watching and analyzing the microscopic dance of nuclei: glowing nubs dividing and moving in a puzzling pattern, not altogether orderly, not quite random, at varying directions and speeds, neighboring nuclei more in sync than those farther away. The performance belied a choreography beyond mere physics or chemistry.

“The geometries that the nuclei come to assume are the result of their ability to sense and respond to the density of other nuclei near to them,” Dr. Extavour said. Dr. Di Talia was not involved in the new study but found it moving. “It’s a beautiful study of a beautiful system of great biological relevance,” he said.

Journey of the nuclei

They shot videos using a laser-light sheet microscope: Snapshots captured the dance of the nuclei every 90 seconds during the embryo’s initial eight hours of development, in which time 500 or so nuclei had amassed in the cytoplasm. (Crickets hatch after about two weeks.)

Typically, biological material is translucent and difficult to see even with the most souped-up microscope. But Taro Nakamura, then a postdoc in Dr. Extavour’s lab, now a developmental biologist at the National Institute for Basic Biology in Okazaki, Japan, had engineered a special strain of crickets with nuclei that glowed fluorescent green. As Dr. Nakamura recounted, when he recorded the embryo’s development the results were “astounding.”

That was “the jumping-off point” for the exploratory process, Dr. Donoughe said. He paraphrased a remark sometimes attributed to the science fiction author and biochemistry professor Isaac Asimov: “Often, you’re not saying ‘Eureka!’ when you discover something, you’re saying, ‘Huh. That’s weird.’”

Initially the biologists watched the videos on loop, projected onto a conference-room screen — the cricket-equivalent of IMAX, considering that the embryos are about one-third the size of a grain of (long-grain) rice. They tried to detect patterns, but the data sets were overwhelming. They needed more quantitative savvy.

Dr. Donoughe contacted Christopher Rycroft, an applied mathematician now at the University of Wisconsin-Madison, and showed him the dancing nuclei. ‘Wow!’ Dr. Rycroft said. He had never seen anything like it, but he recognized the potential for a data-powered collaboration; he and Jordan Hoffmann, then a doctoral student in Dr. Rycroft’s lab, joined the study.

Over numerous screenings, the math-bio team contemplated many questions: How many nuclei were there? When did they start to divide? What directions were they going in? Where did they end up? Why were some zipping around and others crawling?

Dr. Rycroft often works at the crossroads of the life and physical sciences. (Last year, he published on the physics of paper crumpling.) “Math and physics have had a lot of success in deriving general rules that apply broadly, and this approach may also help in biology,” he said; Dr. Extavour has said the same.

The team spent a lot of time swirling ideas around at a white board, often drawing pictures. The problem reminded Dr. Rycroft of a Voronoi diagram, a geometric construction that divides a space into nonoverlapping subregions — polygons, or Voronoi cells, that each emanate from a seed point. It’s a versatile concept that applies to things as varied as galaxy clusters, wireless networks and the growth pattern of forest canopies. (The tree trunks are the seed points and the crowns are the Voronoi cells, snuggling closely but not encroaching on one another, a phenomenon known as crown shyness.)

In the cricket context, the researchers computed the Voronoi cell surrounding each nucleus and observed that the cell’s shape helped predict the direction the nucleus would move next. Basically, Dr. Donoughe said, “Nuclei tended to move into nearby open space.”

Geometry, he noted, offers an abstracted way of thinking about cellular mechanics. “For most of the history of cell biology, we couldn’t directly measure or observe the mechanical forces,” he said, even though it was clear that “motors and squishes and pushes” were at play. But researchers could observe higher-order geometric patterns produced by these cellular dynamics. “So, thinking about the spacing of cells, the sizes of cells, the shapes of cells — we know they come from mechanical constraints at very fine scales,” Dr. Donoughe said. 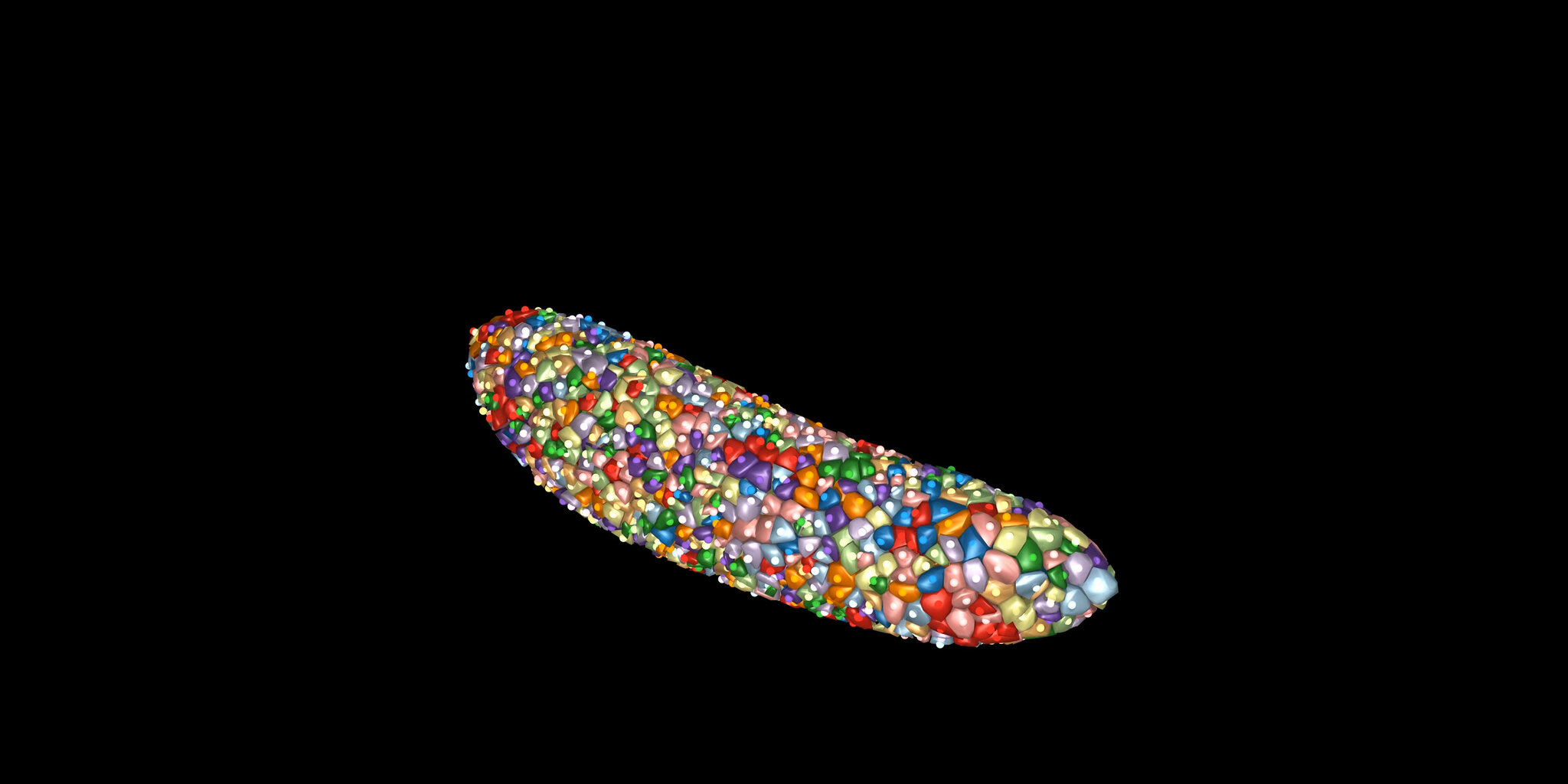 A simulation of cell nuclei dividing and moving within the cricket egg. Each colored blob represents the space around each nucleus. Video by Jordan Hoffmann

To extract this sort of geometric information from the cricket videos, Dr. Donoughe and Dr. Hoffmann tracked the nuclei step-by-step, measuring location, speed and direction.

“This is not a trivial process, and it ends up involving a lot of forms of computer vision and machine-learning,” Dr. Hoffmann, an applied mathematician now at DeepMind in London, said.

They also verified the software’s results manually, clicking through 100,000 positions, linking the nuclei’s lineages through space and time. Dr. Hoffmann found it tedious; Dr. Donoughe thought of it as playing a video game, “zooming in high-speed through the tiny universe inside a single embryo, stitching together the threads of each nucleus’s journey.”

Next they developed a computational model that tested and compared hypotheses that might explain the nuclei’s motions and positioning. All in all, they ruled out the cytoplasmic flows that Dr. Di Talia saw in the fruit fly. They disproved random motion and the notion that nuclei physically pushed each other apart.

Instead, they arrived at a plausible explanation by building on another known mechanism in fruit fly and roundworm embryos: miniature molecular motors in the cytoplasm that extend clusters of microtubules from each nucleus, not unlike a forest canopy.

The team proposed that a similar type of molecular force drew the cricket nuclei into unoccupied space. “The molecules might well be microtubules, but we don’t know that for sure,” Dr. Extavour said in an email. “We will have to do more experiments in the future to find out.”

The geometry of diversity

This cricket odyssey would not be complete without mention of Dr. Donoughe’s custom-made “embryo-constriction device,” which he built to test various hypotheses. It replicated an old-school technique but was motivated by previous work with Dr. Extavour and others on the evolution of egg sizes and shapes.

This contraption allowed Dr. Donoughe to execute the finicky task of looping a human hair around the cricket egg — thereby forming two regions, one containing the original nucleus, the other a partially pinched-off annex.

Then, the researchers again watched the nuclear choreography. In the original region, the nuclei slowed down once they reached a crowded density. But when a few nuclei sneaked through the tunnel at the constriction, they sped up again, letting loose like horses in open pasture.

This was the strongest evidence that the nuclei’s movement was governed by geometry, Dr. Donoughe said, and “not controlled by global chemical signals, or flows or pretty much all the other hypotheses out there for what might plausibly coordinate a whole embryo’s behavior.”

Fluorescent nuclei in a cricket embryo that has been constricted by a human hair. Video by Seth Donoughe

By the end of the study, the team had accumulated more than 40 terabytes of data on 10 hard drives and had refined a computational, geometric model that added to the cricket’s tool kit.

“We want to make cricket embryos more versatile to work with in the laboratory,” Dr. Extavour said — that is, more useful in the study of even more aspects of biology.

The model can simulate any egg size and shape, making it useful as a “testing ground for other insect embryos,” Dr. Extavour said. She noted that this will make it possible to compare diverse species and probe deeper into evolutionary history.

But the study’s biggest reward, all the researchers agreed, was the collaborative spirit.

“There’s a place and time for specialized knowledge,” Dr. Extavour said. “Equally as often in scientific discovery, we need to expose ourselves to people who aren’t as invested as we are in any particular outcome.”

The questions posed by the mathematicians were “free of all sorts of biases,” Dr. Extavour said. “Those are the most exciting questions.”