Produced by ‘The Argument’

The sweeping rise of Christian nationalism on the right has taken extreme forms since the election of Donald Trump in 2016. From “Stop the Steal” to the storming of the U.S. Capitol and now, the overturn of Roe v. Wade — Christian nationalist rhetoric has undergirded it all. But given that a majority of Americans identify as Christian, faith also isn’t going anywhere in our politics. So what would a better relationship between church and state look like?

To discuss, Jane Coaston brings together two people who are at the heart of the Christian nationalism debate. Katherine Stewart is the author of “The Power Worshippers: Inside the Dangerous Rise of Religious Nationalism” and has reported on the Christian right for over a decade. Esau McCaulley is a contributing writer for Times Opinion and theologian-in-residence at Progressive Baptist Church in Chicago.

[You can listen to this episode of “The Argument” on Apple, Spotify, Amazon Music, or Google or wherever you get your podcasts.]

Stewart feels that the movement is paving the way to something with graver consequence. “This is a movement that wants to promote theocratic policies,” she says. “But theocracy is really not the end point. It’s sort of a means to an end, which is authoritarianism.” McCaulley agrees the danger is real. But to him, there’s a place for faith-informed arguments in the public square. “When you try to enforce your religion as the base of your argument and the sole way of being a good American, that’s Christian nationalism,” he says. “And when you’re saying, well, hold on, here is a value that I want to advocate for, perhaps this is my best presentation of the issue, let’s vote and let society decide — I think that’s the best that you can hope for.”

Mentioned in this episode: 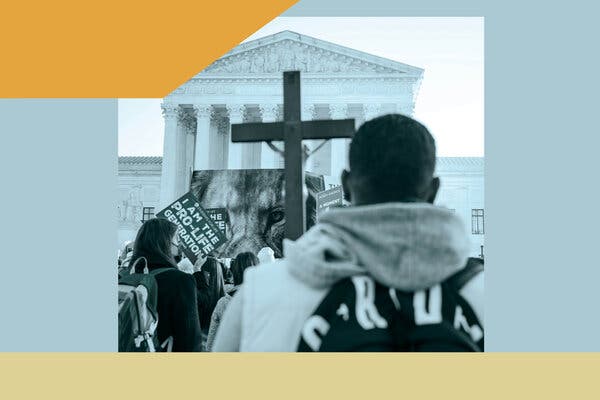 Thoughts? Email us at argument@nytimes.com or leave us a voice mail message at (347) 915-4324. We want to hear what you’re arguing about with your family, your friends and your frenemies. (We may use excerpts from your message in a future episode.)

By leaving us a message, you are agreeing to be governed by our reader submission terms and agreeing that we may use and allow others to use your name, voice and message.

“The Argument” is produced by Phoebe Lett and Vishakha Darbha. Edited by Alison Bruzek and Anabel Bacon. With original music and sound design by Isaac Jones. Mixing by Pat McCusker. Fact-checking by Kate Sinclair and Michelle Harris. Audience strategy by Shannon Busta with editorial support from Kristina Samulewski.

This Is How the U.S. Will Stand With Taiwan