Serena Williams did not invent a tennis shot, although she certainly came close to perfecting one with her serve.

She was not, in the absolute sense, a pioneer for elite Black tennis players. Althea Gibson and Arthur Ashe were the first Black players to face down the barriers to entry and succeed at the highest level, followed by champions like Zina Garrison and Yannick Noah.

But there is no doubt, with Williams about to play in her farewell U.S. Open just ahead of turning 41, that she changed the game she long dominated; the game she has learned, over time, to treasure.

Her legacy, which is in many respects shared with her older sister and soulmate Venus Williams, is evident in the powerful, aggressive style that has become the norm, if not quite the rule, on tour. See the full-cut, all-action, rip-the-return approach of No. 1 Iga Swiatek and Elena Rybakina, the new Wimbledon champion.

“One of the greatest impacts Serena had is she definitely took the game to a different level,” said Mary Joe Fernandez, the ESPN analyst and former WTA star whose playing career overlapped with those of the Williamses. “Serena changed it in different ways, whether physically, mentally or movement-wise. It just got better, and it got better because of Serena and also Venus.”

The legacy is also there in the presence of talented young Black women’s stars like Coco Gauff and Naomi Osaka and in the increasing number of Black junior players, who, along with their families, have used the Williams sisters as a template. Another indicator: 10 of the top 30 Americans in this week’s WTA singles rankings are Black or biracial (and none of those 10 is a Williams sister at this stage). 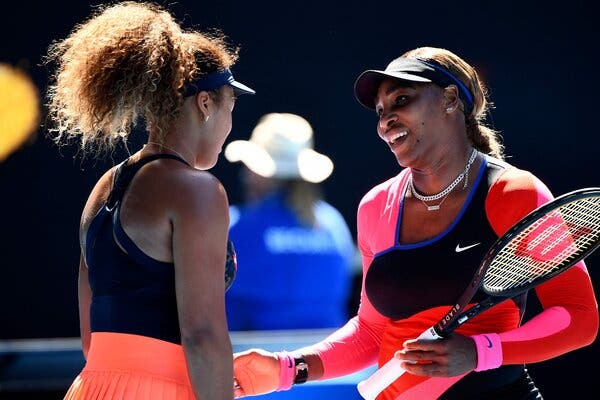 “I think everything started with Venus and Serena,” said Martin Blackman, general manager of player development at the United States Tennis Association. “There’s no doubt about the power and the impact of that demonstration effect. I think it was even more powerful because they grew up in Compton, and no matter where you live, you know that Compton is a tough place to grow up. And what their parents Richard and Oracene did to get them what they needed to become champions is just an unbelievable American success story.”

That story, as Blackman points out, has resonated not just with African-American families. It has much broader reach.

“It could be Latino, Asian or Caucasian — it doesn’t matter. It transcends all races,” said Nick Saviano, a veteran American coach who owns an academy in Florida and has worked with leading pro players like Sloane Stephens, Amanda Anisimova, Eugenie Bouchard and Gauff.

“I see the Williamses’s impact every day,” Saviano said. “If I go to a 10-and-under tournament I see it. I see more people from different ethnic backgrounds. I see people daring to dream big.”

In pure tennis terms, when it comes to the actual playing of the game, the Williams sisters have been more about evolution than revolution, more about the often-irresistible quality of the overall package than groundbreaking innovation. And though Serena has undoubtedly been the greatest player of this era, Venus, with a similar tool kit, did come first and is inextricably part of the step change.

“I like to look at them individually and at their individual accomplishments, but it’s hard to separate them because they helped each other be great,” said Corey Gauff, father and coach of Coco Gauff.

The great women’s players who preceded the sisters had plenty of strengths. Chris Evert was a paragon of cool and consistency. Martina Navratilova set new standards for fitness and attacking prowess, relishing life at the net. Steffi Graf had speed and explosive power off her unconventional, often-airborne forehand, and her crisply chipped backhand was devilish in a different way: skidding low and proving difficult to attack.

Monica Seles, with deft double-handed groundstrokes, was a relentless ball-striker and in-the-moment competitor who hugged the baseline and could hit winners off the short bounce with her forehand or her backhand. The relatively underpowered Martina Hingis played tennis akin to chess or geometry by changing paces, angles and trajectories.

But Venus and then, very quickly, Serena posed an unprecedented, multipronged threat. They were big servers and big hitters who could also sprint into the corners, players who could produce winners with any stroke and make their side of the court look frightfully small to the opposition.

“It was just like another dimension of physicality, power and mental toughness,” Fernandez said. “I think those are the three things that stood out: how hard and how consistently they were able to hit the ball and how well they were able to cover the court and then the grit. I mean, to beat Serena you had to knock her out a few times.”

Fernandez, a three-time Grand Slam singles finalist once ranked as high as No. 4, said the Williamses’s emergence contributed to her decision to retire in 2000.

“I caught Serena and Venus at the end of my career, but they’re one of the reasons I was like, ‘OK, the game has evolved now, and I can’t keep up’,” she said “It was such a struggle to be able to withstand it. I couldn’t match it, so I just knew this was now a different level, a different stage in the sport. Game-wise, I think they both improved as years went by, both became better players and became students of the game, but it was just that dominant power, court coverage and intensity.”

Justine Henin, the Belgian star with the gorgeous one-handed backhand who was one of Serena’s early and fiercest rivals, said that the intimidation was real.

“We can talk all we want about her tennis qualities, but one of her strengths was to show that she was convinced that she was going to walk right over you even though normally she should have been full of doubts like all players,” Henin said of Serena in a recent interview with the French publication L’Équipe. “That generated all kinds of fears for her opponents. I was afraid for a long time.”

Swiatek, Gauff and the new wave of women’s players seem less inclined to intimidate their opponents, though anyone who has experienced Aryna Sabalenka roar as she generates startlingly easy power can detect a sonic and attitudinal link with Serena.

The Williams sisters popularized the open-stance backhand and the swing or drive volley, though they were not the progenitors.

Serena Williams plays a backhand at the 2019 Australian Open.Credit…Asanka Brendon Ratnayake for The New York Times

“People say Serena was not a great volleyer, and no, she wouldn’t be categorized as having a great forehand or backhand volley,” Saviano said. “Because most of the time she was finishing points with swinging volleys, and she was brilliant at it.”

The sisters also re-emphasized the importance of early preparation on the backhand.

“Super early,” Saviano said. “They basically just pulled the racket back almost immediately and waited for the ball. Technically, that was a bit unusual.”

They followed Seles’s lead by attacking second serves relentlessly, even when the errors sometimes piled up.

The next generation clearly took note, and it is a tribute to both sisters and part of their heritage that their power is no longer a cut above. Their successors have adapted, as Emma Raducanu, last year’s surprise U.S. Open champion from Britain, made clear when she beat Serena, 6-4, 6-0, in the first round of the Western and Southern Open this month. Raducanu counterpunched coolly and effectively when Serena upped the volume and velocity.

Though there were true power servers in the pre-Williams years like Brenda Schultz-McCarthy of the Netherlands, Serena raised the bar with her smooth and potent serve. More women on tour are capable of regularly approaching 110 miles per hour and beyond with their first serves, players like Rybakina, Osaka, Sabalenka, Gauff, Karolina Pliskova and Maria Sakkari.

“I really think Serena let people know if you’re strong and tall and want to be successful in tennis, you can serve this big,” said Rennae Stubbs, the ESPN analyst and former world No. 1 doubles player from Australia who has also coached stars like Pliskova.

A fan holds a sign in support of Serena Williams during the match between Williams and Emma Raducanu of Great Britain during the Western & Southern Open in August.Credit…Dylan Buell/Getty Images

Stubbs is providing Serena with on-court advice this week during practice as part of the coaching team. “I’m just helping; I’m advising,” she said. “We’ve been great friends for a long time, and I’m just helping her as much as I can to finish this career the way it deserves to be finished.”

Stubbs added: “Whatever happens, she has proved herself to be truly one of the great athletes of all time, and we’re going to miss her passion. That’s the word I think that epitomizes Serena so well is just passion for the game of tennis and sports and passion for excellence. That’s what separates the great ones.”

She continued: “And when they felt the excellence was not there anymore, they could walk away. And I think that’s where Serena is at right now.”

Though Serena has announced that the end is near, she still is not prepared to state plainly that the U.S. Open is her last tournament, even as she prepares to face Danka Kovinic, an unseeded Montenegrin, in the first round on Monday night.

“I don’t know, I think so, but who knows?” she said on Thursday during a public appearance hosted by a Manhattan hotel.

The Australian Open, the next Grand Slam tournament on the calendar, starts in January. Could she be there?

“I don’t think so,” she said. “You never know. I’ve learned in my career: Never say never.”

There is a message in her resistance to goodbye, as well. She has played far longer than even she expected or her father, Richard, predicted. In doing so, in coming back from childbirth at age 36 to play several more seasons, she has reminded the younger generation to follow their own timelines, much as Navratilova did before her and as her 41-year-old contemporary Roger Federer has done in the game that he also is clearly loath to leave.

“I think one of the best things Serena has given to this sport is her longevity and still wanting to be great,” Stubbs said.

That is part of her legacy, too.