Mexico, or large parts of it, is running out of water.

An extreme drought has seen taps run dry across the country, with nearly two-thirds of all municipalities facing a water shortage that is forcing people in some places to line up for hours for government water deliveries.

The lack of water has grown so extreme that irate residents block highways and kidnap municipal workers to demand more supply.

The numbers underlining the crisis are startling: In July, eight of Mexico’s 32 states were experiencing extreme to moderate drought, resulting in 1,546 of the country’s 2,463 municipalities confronting water shortages, according to the National Water Commission.

By mid-July, about 48 percent of Mexico’s territory was suffering drought, according to the commission, compared with about 28 percent of the country’s territory during the same period last year.

While tying a single drought to human-caused climate change requires analysis, scientists have no doubt that global warming can alter rainfall patterns around the world and is increasing the likelihood of droughts.

Across the border in recent years, most of the Western half of the United States has been in drought, with conditions ranging from moderate to severe.For the region, this period is now the driest two decades in 1,200 years. 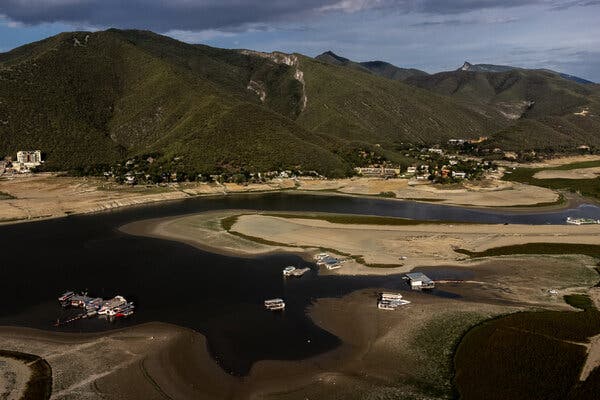 The water level under the Rodrigo Gómez Dam in Santiago, Mexico, is so low that people can get to it on foot or by car.

People looking for metal beneath the Rodrigo Gómez dam, an area once under about 100 feet of water.

The crisis is particularly acute in Monterrey, Mexico’s second-largest city and one of its most important economic hubs, where the entire metropolitan area of about five million people is affected by drought, according to officials. Some neighborhoods in Monterrey have been without water for 75 days, leading many schools to close before the scheduled summer break.

The situation in the city has gotten so dire, a visiting journalist could not find any drinking water for sale at several stores, including a Walmart.

Buckets, too, are scarce at local stores — or being sold at astronomically high prices — as Monterrey’s residents scrape together containers to collect water supplied by government trucks sent to the driest neighborhoods. Some residents clean out trash cans to ferry water home, children struggling to help carry what can amount to 450 pounds of water.

While Monterrey’s poorest neighborhoods are the hardest hit, the crisis is affecting everyone, including the wealthy.

“Here you have to chase the water,” said Claudia Muñiz, 38, whose household is often without running water for up to a week. “In a moment of desperation, people explode,” she said about the violence that has flared as people fight over what water there is.

The man wearing a blue baseball cap filling buckets with water from a government truck.
This neighborhood in Monterrey had been without running water for eight days.

Monterrey is in northern Mexico, the most parched region of the country, which has seen its population grow in recent years as the economy boomed. But the area’s typically arid weather is struggling to support the population as climate change reduces what little rainfall the region has.

Monterrey’s residents can now walk across the floor of the reservoir that was created by the Cerro Prieto dam and that was once one of the city’s largest sources of water. The reservoir also used to be a major tourist attraction that the local government marketed for its lively waterfront restaurants and its fishing, boating and water-skiing.

Now Cerro Prieto is mostly popular because of the coins buried at the bottom of the reservoir that bakes under the sun. Residents swipe metal detectors across exposed rock and scrub, filling pouches with peso coins once tossed in by visitors as they made a wish.

Along with the Cerro Prieto reservoir, a seven-year drought —interrupted only by strong rains in 2018, according to a local official — has also dried up water along two other dams that provide most of Monterrey’s water supply. One dam reached 15 percent of its capacity this year, while the other reached 42 percent. The rest of the city’s water comes from aquifers, many of which are also running low.

Police officers standing guard in Monterrey where demonstrators had called for a protest and a blockade to demand more water.
Angry residents have taken water truck drivers hostage and stoned trucks, saying the government is not supplying enough to their neighborhoods.

The amount of rain in July in parts of the state of Nuevo León, which borders Texas and whose capital is Monterrey, was just 10 percent of the monthly average recorded since 1960, according to Juan Ignacio Barragán Villarreal, the general director of the city’s water agency.

“In March it did not rain a single drop in the entire state,’’ he said, adding that it was the first rain-free March since the government started keeping records in 1960.

Today, the government distributes a total of nine million liters of water daily to 400 neighborhoods. Every day “pipas,” large trucks filled with water and pipes for distribution, fan out across Monterrey and its suburbs to tend to the needs of the driest neighborhoods, often illegal settlements that are home to the poorest residents.

Alejandro Casas, a water truck driver, has been working for the government for five years and said that when he started, he supported the city’s firefighters and was called perhaps once or twice a month to deliver water to a fire scene. His workdays were often spent staring at his phone.

But since Monterrey’s water shortage became so acute that taps started runningdry in January, he now works every day, making up to 10 daily trips to various neighborhoods to supply about 200 families with water with each trip.

By the time Mr. Casas arrives, a long queue snakes through neighborhood streets with people waiting their turn. Some families carry containers that can hold 200 liters, or 53 gallons, and wait in the sun throughout the afternoon before finally receivingwater at midnight.

The water he delivers can be all the family gets for up to a week.

Carrying water home from a distribution point in Monterrey.
A cistern in Monterrey beneath this patch of grass is half empty. The entrance to the cistern is at right.

No one polices the lines so fights break out, as residents from other communities try to sneak in instead of waiting for trucks to reach their neighborhood days later. Residents are allowed to take home as much water as their containers can hold.

In May, Mr. Casas’s truck was stormed by several young men who got into the passenger seat and threatened him as he was delivering water to the San Ángel neighborhood.

“They spoke to me with a very threatening tone,” Mr. Casas said, explaining that they demanded he drive the truck to their neighborhood to distribute water. “They told me that if we don’t go to where they wanted, they were going to kidnap us.”

Mr. Casas headed to the other neighborhood, filled residents’ buckets and was set free.

Edgar Ruiz, another government water truck driver, has also seen the crisis worsen. Starting in January he has delivered water from the wells the government controls and has watched nervously each week as their levels plunge.

“In January I distributed two or three pipes,” he said, referring to individual water tanks that can carry up to 15,000 liters. “Now I distribute 10, and they have hired many more people” to drive water trucks. Neighboring states have also sent drivers and trucks to help out.

He now fears doing his job. Residents used to be grateful when they saw his water truck entering their neighborhood; now they are irate the government has not been able to fix the water shortage.

“They stoned a water truck,” he said.

María De Los Ángeles, 45, was born and raised in Ciénega de Flores, a town near Monterrey. She says the water crisis is straining her family and her business.

“I have never experienced a crisis like this before,” Ms. De Los Ángeles said. “The water only comes through our taps every four or five days.”

The crisis, she said, is pushing her into bankruptcy — a garden nursery she owns is her family’s only source of livelihood and needs more water than can be provided by the occasional water that flows through her home’s taps.

“I have to buy a water tank every week that costs me 1,200 pesos,” equal to $60, from a private supplier, she said. That consumes about half of her weekly income of $120.

Lining up at night to receive drinking water in Monterrey.
Government water trucks are sent to about 400 of Monterrey’s driest neighborhoods.

Small business owners like Ms. De Los Ángeles are frustrated that they are left to fend for themselves while Monterrey’s big industries are largely able to operate normally. Factories are able to draw 50 million cubic meters of water per year because of federal concessions that give them special access to the city’s aquifers.

The government is struggling to respond to the crisis.

To try to mitigate future shortages, the state is investing about $97 million to build a plant to treat wastewater and plans to buy water from a desalination plant under construction in a neighboring state.

The government has spent about $82 million to rent more trucks to distribute water, pay additional drivers and dig more wells, according to Mr. Barragán, the general director of the water agency.

The governor of Nuevo León state, Samuel García, recently urged the world to act together to tackle climate change because it was beyond the capacity of any single government to confront.

“The climate crisis has caught up to us,” Mr. García wrote on Twitter.

“Today we have to take care of the environment, it is life or death.”

A tourist boat grounded in a reservoir near Monterrey that is nearly dried up.