On a sweltering day in the summer of 1957, a slender young woman from Harlem became the first Black player to win the hallowed Wimbledon tennis tournament in England. After receiving the Venus Rosewater Dish from Queen Elizabeth II, Althea Gibson, 29, attended the Wimbledon Ball that evening, spinning around the dance floor in the arms of the Duke of Devonshire.

The celebration continued in Manhattan, where Ms. Gibson was feted with the first ticker-tape parade up Broadway to honor a woman of color.

But the following day, the illusion that the new queen of tennis had ushered in a chapter of racial equity shattered. When Ms. Gibson arrived in a Chicago suburb for her next tournament, she was refused a room at all of the upscale hotels, one of which also rejected a request to book a luncheon in her honor. 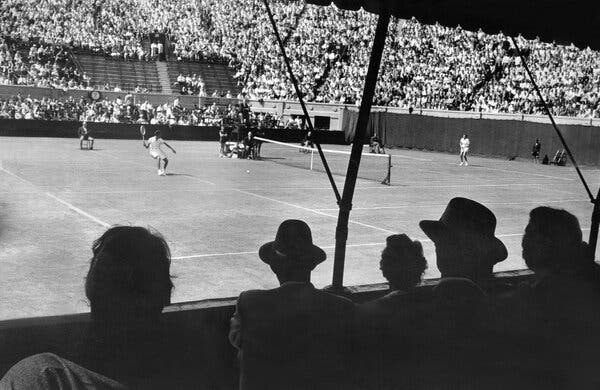 Ms. Gibson, left, broke the color barrier to the sport in 1950 when she became the first Black person to compete in the U.S. Open. By the decade’s end, she had amassed a total of 11 Grand Slam titles.Credit…Carl T. Gossett Jr./The New York Times

“Midnight had come for Cinderella, not in some small Mississippi town, but in liberal Greater Chicago,” a reporter wrote in Saturday Review magazine.

Back in London, the fairy tale disappeared overnight. Lew Hoad, the Wimbledon men’s singles champion who had danced with Ms. Gibson at the ball, awoke the next morning to a pile of angry messages, according to his widow, Jenny Hoad. “There were just hundreds of letters from people who accused him of breaking the rules, saying, ‘You have no right to dance with colored people,’” she recalled. “We didn’t even read most of them.”

But Ms. Gibson had no intention of letting the discrimination she had battled for most of her life stop her rise and imminent reign. Two months later, she became the first Black tennis player to win the tournament now known as the U.S. Open, and by the end of the year, she had become the first Black woman to be ranked No. 1 in the world. Her fortitude and perseverance paved the way for the Black tennis players to come after her, like Arthur Ashe, Zina Garrison and the Williams sisters.

Although largely overlooked after the 1950s, Ms. Gibson is at long last starting to get her due. On Thursday, which would have been her 95th birthday, the block of 143rd Street in Harlem where she first held a racket will be renamed Althea Gibson Way. A life-size statue of a teenage Althea, intended to be erected near the block, is currently in the making.

Later that day, Ms. Gibson will be honored in a program at the Billie Jean King National Tennis Center in Flushing Meadows Corona Park, Queens, home of the U.S. Open, as the tournament begins its 142nd consecutive year. The event, called Divine Nine, is a celebration of fraternities and sororities at historically Black colleges and universities. (Ms. Gibson attended Florida A&M.)

Next year, the West Side Tennis Club in Forest Hills, Queens, the former home of the U.S. Open, where Ms. Gibson braved racist taunts in her first appearance in the majors, plans to honor her at its stadium centennial. There is also the possibility of a quarter bearing her likeness in 2025.

All the recognition might come across as cold comfort to Ms. Gibson, according to Michael Giangrande, whose father was an executive at the sporting goods store that provided her with free rackets. Mr. Giangrande, who is scheduled to speak at the street renaming, remembers Ms. Gibson lamenting that her trophies were the only things of value she got out of tennis, which at the time did not offer cash purses. “She and my dad often joked about it, calling the trophies ‘tin cups,’” he said. “Everyone was making money off the sport except for the players.”

“Althea was a tough girl,” said Bob Davis, a tennis champion himself and one of Ms. Gibson’s hitting partners. Just rallying with her could be intimidating, he said.Credit…Allyn Baum/The New York Times

To understand how much that has changed, consider Serena Williams. The second Black woman to win a Grand Slam singles title, Ms. Williams would go on to win 22 more, becoming themost decorated athlete,male or female, to play competitive tennis in the past 20 years. As such, she has also become a top earner, with a current net worth of $260 million.

When Ms. Williams recently announced her probable retirement following this year’s U.S. Open, she had already started a professional pivot involving venture capital, among other projects. Ms. Gibson, on the other hand, left tennis only to struggle financially for most of her life, making ends meet by touring with the Harlem Globetrotters and working as a community representative for a national baking company, at times dabbling in acting and singing, until her death in 2003.

(Both Serena and Venus Williams are known admirers of Ms. Gibson. In 1999, Serena, then 17, faxed Ms. Gibson a list of questions in connection with a school project, and the sisters used a photo of Ms. Gibson on the back cover of a Black history newsletter they created.)

Ms. Gibson struggled with poverty for most of her life. A part of the Great Migration, her family left South Carolina in 1929. She arrived in Harlem as a toddler months before the stock market crashed. Making matters worse, her family wound up on 143rd Street, which bordered what was known as “the lung block,” because the death rate from tuberculosis among residents there was twice that of other Manhattan neighborhoods, according to the 1939 New York City Guide.

Claude Brown, Ms. Gibson’s first cousin and the author of the best-selling autobiographical novel “Manchild in the Promised Land,” also grew up in Harlem, surrounded by alcoholism and street violence, which he wrote about in the book. By age 9, the protagonist of “Manchild” had been “hit by a bus, thrown into the Harlem River (intentionally), hit by a car, severely beaten with a chain,” and had set the house on fire.

After her 1957 victory in Wimbledon, Ms. Gibson is greeted by her mother at Idlewild Airport in New York City.Credit…Carl T. Gossett Jr./The New York Times

Ms. Gibson was no stranger to such hardships. A towering girl from her earliest days, she spent much of her time on the street shoplifting and fighting with street gangs. Her father, Daniel Gibson, a garage worker, hoped that his daughter would become a competitive boxer, and regularly took her to the rooftop of their building for training. But when his lessons sometimes turned into beatings, she headed to the Society for the Prevention of Cruelty to Children, as she wrote in her autobiography, which gave her shelter.

Another haven for Althea was the Apollo Theater. She loved to sing and play the saxophone, and routinely played hooky to attend the performances there. In 1943, she won second prize in a vocal competition on the Apollo stage. But instead of a week of singing engagements there, which she had been promised, Althea was awarded a prize of $10. “I couldn’t complain,” Ms. Gibson wrote in her autobiography. “That $10 bought a mess of fried chicken, collard greens, and root beer.”

For Althea, competition was a way of life. She took to just about any sport involving a ball. Basketball was one of her favorites, and she was the fastest member of the Mysterious Girls Athletic Club, the prizewinning Harlem basketball team. Once, she and her teammates ran into the champion boxer Sugar Ray Robinson in a bowling alley, and she promptly challenged him, declaring, “I can beat you at bowling right now!”

In 1937, when the Police Athletic League cordoned off 143rd Street to provide a safe play space for children, Althea, 10, discovered paddle tennis. Two years later, she became the city’s paddle tennis champion. Not long after, Buddy Walker, a Harlem bandleader and a supervisor for the league, bought Ms. Gibson a pair of used tennis rackets.

By her own account, Ms. Gibson did not originally feel like tennis would be a natural fit for her. “I remember thinking to myself that it was kind of like a matador going into the bull ring, beautifully dressed, bowing in all directions,” she wrote in her autobiography. “And all the time having nothing in mind except sticking that sword into the bull’s guts and killing him dead as hell.”

Mr. Walker also introduced her to the Cosmopolitan Club, the local Black tennis club where the most prosperous Harlem residents played. Soon, she was beating everyone she played. Club members took up a collection and sent her to tournaments around the country sponsored by the American Tennis Association, a league for Black players.

By 1947, at the age of 20, Ms. Gibson won her first A.T.A. title and went on to win 10 national championships, a record that still stands. Bob Davis, one of Ms. Gibson’s hitting partners, remembers that she was so aggressive on the court that just rallying with her could be intimidating.

“Althea was a tough girl,” recalled Mr. Davis, himself a four-time A.T.A. champion and 2006 United States Tennis Association (U.S.T.A.) mixed doubles champion. “She would be perfectly happy to knock you down with the ball. She did hit me. Every time we played, she would try and hit me.”

Ms. Gibson smashed and lobbed her way to the top ranks of tennis, breaking the color barrier to the sport in 1950 when she became the first Black person to compete in the U.S. Open.By the decade’s end, she had amassed a total of 11 Grand Slam titles, including multiple championships at Wimbledon, the U.S. Open and the French Open, where, in 1956, she won titles in both singles and doubles. But for Ms. Gibson, even that wasn’t enough. As soon as she retired from tennis, she jumped into another sport, and in 1964 became the first Black woman to join the Ladies Professional Golf Association.

“Everything Althea had to do was three times harder than it was for a non-person of color,” said Katrina Adams, a former professional tennis player and the first Black person to serve as the president of the U.S.T.A. “For me, what she did was transcendent.”

Sally H. Jacobs is the author of the biography “Althea: The Life of Tennis Champion Althea Gibson,” which will be published next year.

The Pros and Cons of Congestion Pricing in Manhattan