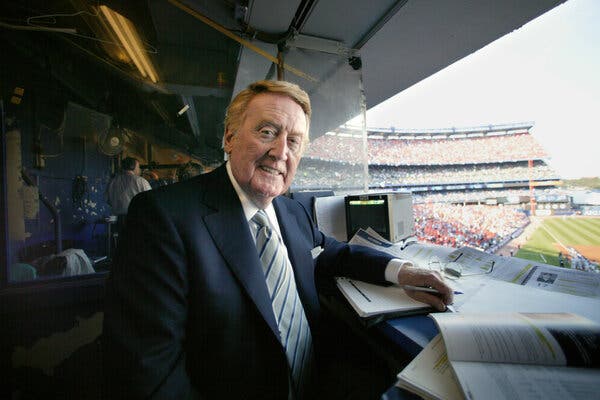 Vin Scully at Shea Stadium in Queens, N.Y., before the start of the 2006 National League division series between the Los Angeles Dodgers and the Mets.Credit…Andrew Gombert for The New York Times

For 67 summers, Vin Scully served as the announcer for Dodgers baseball games; for even longer, he was the enduring face — and voice — of the franchise.

When the team relocated from Brooklyn to Los Angeles in 1957, Scully moved with it and became “the warm voice wafting out into a warm climate.” After his final broadcast in 2016, he remained a beloved force in a town synonymous with fleeting fame.

“He was Venice Beach, Pink’s hot-dog stand and the Hollywood Bowl all rolled into one,” my colleague Scott Miller writes in his article about what Scully means to the City of Angels. “He was Los Angeles, the sound of summer, the poet laureate of the Dodgers.”

Scully died on Tuesday at age 94. His death led to an outpouring of memories from fans who viewed him as inextricably linked to the history of baseball, to summers in California and to evenings shared with family and friends.

Here’s a sampling of what you shared about the national sports treasure:

“I am a Southern California native, and my dad began taking me and my two older brothers to Dodger games in the mid-1960s. Needless to say, Vin Scully was a constant voice in the house, coming over the old radio in our kitchen for countless nights during sweltering summers.

He was my secret hero. In my late teens, probably around 1977 or 1978, one of my brothers and his wife accompanied me to our usual seats on the first base side, loge section, at Dodger Stadium. When the game ended, we waited for a while to avoid traffic. From our seats, we looked up and could see Vin behind his desk in the broadcasting booth. My sister-in-law and I began screaming and waving our arms in his direction: ‘We love you, Vinny, we love you!’ Sure enough, he stood up, leaned over and yelled back, ‘I love you, too!’ I almost fainted.” — Angela Riggio, Lake Arrowhead

“As a young girl, I spent summers with my grandparents in San Bernardino. My favorite memory of Vin Scully (and of my grandfather) was sitting in my grandfather’s lap, watching the Dodgers on TV with the sound turned off and listening to the radio sitting on the TV stand next to his recliner, listening to Vin Scully calling the game. In those long, hot summer nights, it always felt like it was just the three of us — me, my grandfather and Vin Scully. As I got older, I would sit on the couch right next to my grandfather and watch ‘the game,’ as he called it, with Vin Scully right there with us. His voice will always be the sound of the Dodgers for me. Hearing the passing of Vin Scully brought a flood of happy memories back and very sad tears, because now I have lost two great men from my childhood.” — Stephanie Kenny, San Diego

“I was lucky enough to be attending the 1988 World Series Game 1. My husband and I took my mom and his dad. His dad had just celebrated his 68th birthday but was in a wheelchair suffering from A.L.S. We originally planned to leave early to beat the crowd, but it was a close game and no one wanted to leave.

Bottom of the ninth, Gibson comes up and then, as Vinny said, the impossible happens. That home run, that limping around the bases, pumping his arm. The crowd in the stadium went wild, and those who were in the parking lot started to turn around and come back.

My father-in-law died the following May, but that moment — to be able to be there and listen to the guy he always listened to on the radio — was a memory that will never go away.” — Patti Rasmussen, Santa Clarita

“When I was about 12 years old, I took my dad’s short-wave radio to a Stockton Ports minor league game so I could listen to the Dodgers game in Giants country that night. I was able to bring in a scratchy signal and hear Vin Scully do the play-by-play. At first, the men around me were annoyed, but by the seventh inning they were huddled around me to hear Vin paint word pictures as Sandy Koufax pitched a perfect game. When it was over, I got a round of thanks from the veteran fans of baseball. I’ll never forget that night and how I was treated as a member of the true fan club.” — Larry Allen, Cobb

“Growing up in Compton and Lynwood in the 1970s, I remember nights staying at my Nana’s house, listening to Dodgers games on my transistor radio, keeping the volume low so that I wouldn’t get in trouble for not being asleep. I’ve since learned that I was not special in this regard; so many people did exactly the same thing. Vin Scully was the voice of baseball and became a lifeline to home when I moved away, first to Northern California, then out of state. His voice was everything — yes, it was baseball, but it was also the comfort of your favorite sweatshirt, a warm blanket or a hug from a dear friend.” — Leigh Sterten, San Diego

“A friend of the family gave me a small transistor radio in about 1965. I lived in a tract home in Yorba Linda and was 8 or 9 years old when I’d take a beach towel and lay it out on the front yard and listen to KHJ. One day, I heard Vinny’s voice and I listened to an entire ballgame, with Sandy Koufax pitching (still my hero to this day!). They were playing the Giants, because I remember hearing about Willie Mays. That became my little routine. Just some 9-year-old girl, with her glove and her bat, who wasn’t allowed to play Little League like my brother, listening to Vin Scully and loving Dodgers baseball. I still do.” — Stephanie Wilson, Thousand Oaks

“I loved Vin as if he was family, as I’m sure many native Angelenos did. I bought some scrappy tickets to the last home game he announced in 2016. Little did I know, there actually wasn’t a bad seat in the house … or a dry eye. And Charlie Culberson hit a walk-off homer for the Dodgers to win the pennant! I’ll never forget Vin singing “Wind Beneath My Wings” at the end. I was an absolute puddle, looking around to see I wasn’t alone in how I felt. Vin will be deeply, deeply missed.” — Chelsea Green, San Francisco

When Fresno Cambodian Nights began in 2021, the event immediately drew worldwide attention. The night market is modeled after its lively counterparts in Cambodia, but there wasn’t anything like it before in the United States.

A Cambodian man in Australia wrote a song about it. A Cambodian French family came to see it firsthand. The Khmer community in Long Beach, the largest in the nation, looked into starting its own.

The Central Valley night market was started by Danny Kim, a Fresno police sergeant, as a way to connect with the past and share Cambodian culture in the present and future. Kim was 1 month old when his family was moved to a Khmer Rouge death camp, and he was 11 years old when his family eventually immigrated to the United States.

“We’re the first generation who could think about more than surviving,” Kim told The Los Angeles Times.

And on a summer night at Kim’s market in Fresno this year, Cambodian immigrants moved to music that a regime had tried to silence forever.

Thanks for reading. I’ll be back tomorrow. — Soumya

Allison Honors and Briana Scalia contributed to California Today. You can reach the team at CAtoday@nytimes.com.

‘I made an honest mistake,’ Griner tells the court.

More Renters Are Moving Out of Town. But Where Are They Going?