Kimchi is like a zombie, said Ji Hye Kim, the chef at Miss Kim in Ann Arbor, Mich. “Not quite alive, but not quite dead.”

In kimchi making, salt stalls the decomposition of fresh vegetables and allows good lactic-acid bacteria to grow through fermentation. Ms. Kim, 44, recalls a time in her life, back in Seoul, when she had to keep watch for the building superintendent as her mother buried a crock of kimchi in the flower garden of their apartment complex. Months later, they would dig it up and enjoy the kimchi in its aged state, with its pleasurable tang and abundance of umami. 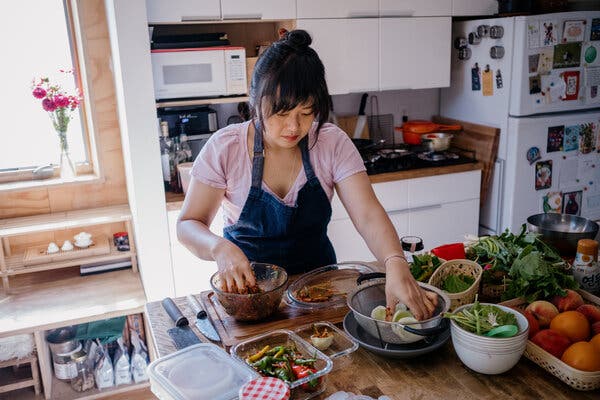 Now a chef in Ann Arbor, Mich., Ji Hye Kim lives alone, so she never makes more than two heads of napa cabbage kimchi for herself. She doesn’t bury the jars either; she stores them in her refrigerator.Credit…Erin Kirkland for The New York Times

With a pickled briny flavor and gamchil mat (“savory taste” in Korean), kimchi is the national dish of South Korea and traditionally prepared at a kimjang, the communal act of making and sharing kimchi. Over the course of multiple days each November, neighbors and family members gather to preserve pounds and pounds of butter-yellow napa cabbage by salting them and then mixing and packing them with sauce.

For many communities in South Korea, a kimjang (also spelled gimjang) remains a grand act. But these days, Korean cooks outside of the motherland are adapting to their individual environments accordingly, scaling down their kimjangs to fit their lives or even hosting them virtually.

In a world where most people buy their kimchi at the store, preserving the act of preservation has become a priority for Koreans who wish to carry on the tradition of kimjang.

Resourceful and adaptive, Koreans are not shy about using nontraditional ingredients that are unfamiliar to them, Ji Hye Kim said. Part of the joy of making kimchi is thinking of it as a formula rather than a set list of ingredients.Credit…Erin Kirkland for The New York Times

Since 2013, UNESCO has recognized kimjang as an intangible cultural heritage, a tradition and set of living knowledge that is not physical like a monument.

Some of the world’s most invaluable knowledge resides within people who must pass it down in order for it to survive, said the cultural anthropologist Tim Curtis, a secretary of UNESCO’s Convention for the Safeguarding of the Intangible Cultural Heritage. What’s key is that “this kind of heritage must be developing and evolving, not frozen in time,” he said. “It must be living heritage.”

This notion of living heritage, in the form of kimjang, connects Koreans across the diaspora who share in this knowledge and experience. Kimjang symbolizes the tough Korean spirit: In order to survive harsh times, you must make yourself more resilient. Kimchi was a way to preserve the fall crop so that there would be enough food to last through the winter.

Some traditions may not be as necessary anymore, such as burying your kimchi in the ground to keep it cool in the summer and prevent freezing in the winter (there are refrigerators for that now). But the ritual of kimjang lives on in other ways.

Minam Morris, who runs the S & S Outlet and Asian Market in Solway, Minn., turns a 50-pound box of napa cabbage into kimchi all by herself each week. Her solo kimjangs take her only about a day, a lightning speed that comes from years of experience.

Ms. Morris, 73, immigrated to the United States in 1975 from the Jeolla province of South Korea, in the Southern part of the country where salted seafood, called jeotgal, is found aplenty. That influence is clear in the kimchi she makes, which has anchovy sauce, though she leaves it out of the batches that go to her Minnesotan customers.

Susan Kim, a Brooklyn-based chef whose family is also from the Jeolla province, calls her small-scale kimjangs “New York-style,” just big enough to fit her city kitchen. Sometimes, Ms. Kim, 42, will lean into the briny, seaside tastes of her mother’s kimchi, which often includes fresh oysters. “It’s just a fond memory,” she said of shucking oysters during one mother-daughter kimjang session years ago.

To describe the inimitable flavor that oysters add to kimchi, she uses the word kkekkeutan mat (“clean taste”) — like slurping a raw, sea-cold bivalve at happy hour.

“If you can make a salad, you can make kimchi,” said Lauryn Chun, right, the founder of Mother-in-Law’s Kimchi. Her mother’s, left, seolleongtang recipe inspired the company’s formula.Credit…Tanveer Badal for The New York Times

As a child, Lauryn Chun lived with her grandmother for a couple of years in Seoul, where she saw the bustling magic of kimjang up close. In the fall, her grandmother’s neighborhood of mostly older women came together to make kimchi out of hundreds of pounds of napa cabbage. These kimjangs felt like parties, complete with intermittent tastings of the brined cabbage bundled with the aromatic seasonings.

When Ms. Chun, 52, attempted a batch herself years later in New York, the smell alone took her right back to her grandmother’s kimjangs. The recipe that she used (and now uses for her company, Mother-in-Law’s Kimchi) comes from Jang Mo Jip, her mother’s restaurant in Garden Grove, Calif., which is still running after more than 30 years. It is, she said, “a culmination of people and community and of the ladies who work there.”

The memories of her grandmother’s kimjangs in Seoul have stayed with Ms. Chun through careers in restaurants in California and grape harvesting in Italy, where she noticed the similarities between kimchi and wine.Credit…Tanveer Badal for The New York Times

It’s not that one person or family owns a recipe — through the act of kimjang, the kimchi belongs to everyone.

Perhaps the most important thing to know about kimchi is that it’s not that hard to make. Just because something takes a few steps doesn’t mean those steps are necessarily difficult. “If you can make a salad, you can make kimchi,” Ms. Chun said.

This is especially true when it comes to mak kimchi, a style that begins with chopped cabbage, versus tongbaechu, the more traditional kimjang kimchi that starts with larger halved or quartered heads of napa cabbage, which take much longer to brine.

For the spice averse, baek kimchi is milder and lets you taste the sweet cabbage more fully. This white kimchi is more predominant in the northern parts of South Korea (and in North Korea). The higher up you go on the peninsula, the less you’ll see gochugaru, the chile powder that stains many kimchis red.

Sometimes called mak kimchi, this kimchi formula starts with chopped napa cabbage and is as easy to prepare as dressing a salad.Credit…David Malosh for The New York Times. Food Stylist: Rebecca Jurkevich.

Bo ssam or some kind of braised or steamed pork is a meal commonly eaten after a kimjang with the fresh kimchi as a celebration of all that hard work. But you might consider following the lead of the chef Jeong-In Hwang and turn baek kimchi into a jjigae as he does at San Ho Won, the restaurant he runs with Corey Lee in San Francisco. Anchored by a hunk of pork shoulder that is simmered until tender, the stew is a mighty way to commemorate something as magical as making kimchi.

In this variation of kimchi jjigae using baek kimchi, the same warmth of other jjigaes is evoked without red chiles, allowing you to taste the cabbage more fully.Credit…David Malosh for The New York Times. Food Stylist: Rebecca Jurkevich.

You don’t have to wait until November to have a kimjang. You can kimchi anything.

“I think of it as a formula rather than a list of ingredients,” said Ji Hye Kim, the chef in Ann Arbor, Mich. “Kimchi means salting vegetables that are in season” — and not just napa cabbage. She has kimchi-ed many vegetables every season in her life, including scallions in the spring and sunchokes in the fall.

There’s nothing like the tactile sensation of working with freshly harvested vegetables, and then turning them into a dish you’re going to eat for the next two months, she said. More than anything, kimchi is a reminder of the passage of time, that liminal space between death and (new) life. “There’s something beautiful about that process.”

Estonia says Moscow has not asked for help with the Dugina investigation.

It’s Alive! It’s With the Band! A Computer Soloist Holds Its Own