A.J. Frank watched the Phoenix real estate market and its entire economy implode as he was graduating from high school in 2009, a scarring experience that has made him a cautious saver. He is again living through a major economic upheaval as the cost of living climbs sharply.

Phoenix — among the hardest-hit cities during the housing crisis — is now on the leading edge of another painful economic trend as the United States faces the most rapid inflation in 40 years. The city is experiencing some of the fastest price increases in the nation, something Mr. Frank has felt firsthand.

His landlord tried to raise his rent nearly 30 percent this year, prompting him to move. Mr. Frank, a 31-year-old engineer, is still paying $250 a month more than he was previously, and rising grocery and gas bills have reduced his disposable income.

“It’s always traditionally been a pretty affordable city to live in, but it’s getting more expensive,” Mr. Frank said of Phoenix.

While inflation has been rising quickly across the country, it is especially intense in Sun Belt cities like Phoenix, Atlanta, Miami and Tampa, which have experienced price increases well above 10 percent this year, much higher than the national rate of 8.5 percent in July. Prices in the Southern United States have risen 9.4 percent over the past year, the fastest pace of any large region in the nation and more rapid than in the Northeast, where prices are up 7.3 percent.

Part of the divide can be traced to fuel and electricity costs, which surged earlier this year. Because many Sun Belt cities depend on cars and air-conditioning, those purchases make up a larger percentage of consumer budgets in the region. And, just as it did in 2008, housing is playing a crucial role — this time, through the rental market, which is a major contributor to overall inflation. In Phoenix, rents are up 21 percent from a year ago, and in Miami, they are up about 14 percent. For urban dwellers nationally, rent is up only about half as much, 6.3 percent.

The Sun Belt’s intense bout of inflation matters for several reasons. While inflation is painful everywhere, it is having a disproportionate impact on families in cities like Tampa Bay, where prices have shot up faster than in areas like New York City. Demand at food banks and for eviction counselors has jumped across the region, providers said, as signs of that distress manifest.

And as in 2008, the Sun Belt could serve as a sort of bellwether. Inflation is showing early signs of moderating nationwide, with price increases slowing to 8.5 percent in the year through July, from 9.1 percent the previous month. Still, the same forces that are now causing prices to surge across the South could keep inflation elevated for a longer period.

That’s because a less-intense version of the rent surge that is pushing inflation higher across cities in the American south is beginning to play out in bigger cities in the Northeast and on the West Coast. Real-time market rent trackers that reported prices shooting up in Sun Belt cities last year are now showing bigger increases in places like New York, San Jose and Seattle.

What is inflation? Inflation is a loss of purchasing power over time, meaning your dollar will not go as far tomorrow as it did today. It is typically expressed as the annual change in prices for everyday goods and services such as food, furniture, apparel, transportation and toys.

What causes inflation? It can be the result of rising consumer demand. But inflation can also rise and fall based on developments that have little to do with economic conditions, such as limited oil production and supply chain problems.

Is inflation bad? It depends on the circumstances. Fast price increases spell trouble, but moderate price gains can lead to higher wages and job growth.

How does inflation affect the poor? Inflation can be especially hard to shoulder for poor households because they spend a bigger chunk of their budgets on necessities like food, housing and gas.

Those market rent increases take time to trickle into official inflation figures because of the way the government calculates its data. Much as Phoenix’s official inflation numbers are surging now partly because of the run-up in market rents in 2021, nascent increases in big coastal cities could keep pressure on inflation in months to come. And the effect could be palpable at a national level: New York and its suburbs account for about 11 percent of the nation’s rental housing-related costs in the Consumer Price Index, compared to about 1 percent for Phoenix.

“Even if we get a slowdown in the Sun Belt, it may not be enough to offset what we’re seeing in other markets,” said Omair Sharif, founder of Inflation Insights.

Federal Reserve officials noted that risk at their July meeting, according to minutes released Wednesday, observing that “in some product categories, the rate of price increase could well pick up further in the short run, with sizable additional increases in residential rental expenses being especially likely.”

The Fed has been raising interest rates since March to try to slow consumer and business demand and cool inflation and is expected to lift them again at its meeting in September.

To date, much of the regional divide in price increases — from rents to consumer goods and services — has traced back to migration. People have been flocking to less expensive cities from big coastal ones for years, but that trend accelerated sharply with the onset of the pandemic. The pattern is playing out across both the Mountain West, where inflation is also remarkably high, and the Sun Belt.

For instance, Florida and Arizona experienced some of the biggest population gains in 2021, adding about 221,000 and 93,000 residents through domestic migration. Phoenix and Tampa added newcomers especially rapidly. “As people have basically poured into these Sun Belt metros, that’s put additional demand on the housing market, and supply has struggled to keep up,” said Taylor Marr, an economist at Redfin. “A lot of the inflation variation is pretty correlated with these migration patterns.”

It’s not just shelter, he said. When people leave San Francisco and New York for neighborhoods that have traditionally been more affordable, often taking big city salaries with them in a new era of remote work, they push up prices for a range of products. Local car prices, day care center costs and even food bills may respond to the surge in demand.

In Phoenix, Van Welborn has witnessed the aftershocks of the migration wave. Mr. Welborn, a Redfin agent with 21 years of experience in local real estate, said today’s situation feels very different from 2008’s.

“The housing boom then was a lot of people were buying homes who shouldn’t have been getting them,” Mr. Welborn said. “Now, people are coming from high-cost areas to Phoenix and pushing up prices.”

As people from coastal regions come to the region to buy second homes or rent apartments, they reduce the available housing supply. That causes prices to climb for local residents like Mr. Frank.

Understand Inflation and How It Affects You

“The rent was sticker shock for me,” Mr. Frank said. While he is capable of bearing the increase on his roughly $80,000 salary, he said it “does sting” a little.

Others are less fortunate. In Tampa, Thomas Mantz, president of Feeding Tampa Bay, a food pantry, has seen demand for food assistance climb 35 to 40 percent over the past six months.

“We all have to be concerned when people who are employed, and responsible, and a productive part of our communities cannot make ends meet,” said Mr. Mantz.

Virginia and Daniel Garcia, who care for three young children, are among those seeking help. Before the pandemic, Ms. Garcia stayed at home to look after the children while her husband worked 40 hours a week finishing drywall. But his hours were cut during the pandemic, and the family began turning to food banks to supplement their groceries.

Just as work returned, gas and grocery prices began to surge. And then a few months ago, Mr. Garcia, who is diabetic, got gangrene in his foot so badly that it almost had to be amputated, leaving him out of work. Ms. Garcia has applied for work at a school cafeteria, but for now she is using credit cards for expenses like back-to-school clothes and is counting every penny. 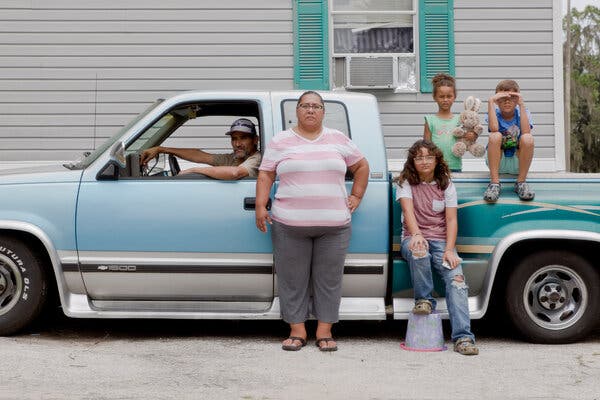 Virginia and Daniel Garcia with their children, top, Aaliyah Garcia, 5, and Aydrean Ortiz, 7, and their granddaughter, Izabella Silva, 10, at their home in Gibsonton, Fla.Credit…Al J. Thompson for The New York Times

Grocery costs “just jumped from one day to another,” Ms. Garcia said. “The bananas and the tomatoes, the meats — we’ve lowered our meats, our proteins, because it’s so expensive.”

The possibility of not having enough food looms ever-present for Ms. Garcia, who at times went without meals as a child and has sworn that her own children will not.

Signals that rising prices are inflicting serious pain on families echo across the Sun Belt. In Miami, legal aid providers have seen a surge in eviction cases as moratoriums end and rents shoot higher. People with housing assistance vouchers are struggling to find apartments within the price range the government has set out, said Sean Rowley at Legal Services Miami, because so few affordable units are on the market and the government’s payments standards have not kept pace with rising rents.

“We’ve seen low-income households lose their vouchers because they cannot lease an apartment,” he said, explaining that if someone does not find housing in an allotted time, the benefit will expire.

A crucial question is what will come next. Fuel costs have moderated in recent months, which is already helping to cool inflation in the Sun Belt and across the nation. And there are encouraging signs that the run-up in rents across Southern cities is slowing: Phoenix leases are 35 percent more expensive than at the start of the pandemic but have risen only 2 percent in the past six months, for instance.

Adam Kamins, a director at Moody’s Analytics who focuses on regional and local forecasting, said he expected inflation to begin to equalize across the country as price increases in the South fade more swiftly.

“I think there’s going to be some level of convergence in regional inflation,” Mr. Kamins said. “We just haven’t seen it yet.”

Berlin, Back in Full Swing

Cambodia Says It’s Found Its Lost Artifacts: in Gallery 249 at the Met